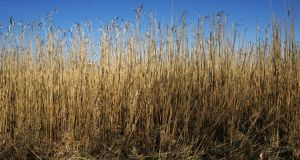 Miscanthus, or elephant grass, is one of a new generation of renewable crops that can be converted into renewable energy by being burned in biomass power stations. Photograph: Frank Miller

Proponents of one of Ireland's new energy crops have said the fledgling industry faces collapse due to Government inaction on introducing a feasible price for its produce.

Miscanthus, or elephant grass, is one of a new generation of renewable crops that can be converted into renewable energy by being burned in biomass power stations.

Successive policy papers by government since 2005, principally the Bioenergy Scheme of 2007, have supported its development and the number of acres being grown has increased from 400 acres to over 6,000 acres.

A key part of its growth has been a financial incentive, provided through the Renewable Energy Feed-In Tariff, or Refit, a support scheme to encourage the growth of such industries.

Miscanthus is seen as a small but important component in the plan for Ireland to achieve its aim of 40 per cent of energy coming from renewable sources by 2020.

The policy was partly underpinned by plans for a new biomass power station. These plans have not materialised and the only outlet is the Bord na Móna power station in Edenderry, Co Offaly.

A dispute has arisen between the industry on one side and the Department of Energy and Bord na Móna on the other, over what it sees as the delayed introduction of a new price level for their crops.

Under a new price tier, or Refit 3, the Government is committed to pay some 46 per cent more (€9.50 per gigajoule) for the feed-in tariff.

The Refit 3 scheme was opened in May 2012 but has not been extended to miscanthus-generated energy to date.

Limerick-based JHM Crops, an energy company which buys some 70 per cent of the Irish crop, has said it cannot continue in operation under the current pricing structure.

“We cannot continue to sustain the losses incurred delivering renewable energy crops ‘from field to furnace’ with a current price which is almost 50 per cent below the recommended Refit price,” said Ronan Madigan of JHM.

“A valuable indigenous carbon-neutral fuel source will be lost if urgent action isn’t taken to resolve this crisis.”

Bord na Móna said in a statement that for a number of technical reasons, principally the chlorine content of the material, it has not encouraged the cultivation of miscanthus but has offered biomass supply contracts for its power station in Edenderry.

It further said that current contractual arrangements between Bord na Móna and biomass suppliers made no mention of Refit 3, “nor do they include mention of any specific price due to be paid under the scheme”.

There are obligations on those who supply the renewable crop to cover the operating and maintenance costs of the power plant.

The miscanthus industry has said the extra cost of burning miscanthus over peat is small, only 2.2 per cent.

On the issue of the high chlorine content in miscanthus, it has said that Edenderry can burn up to 50,000 tonnes without any fear of damage – last year the total was 10,000 tonnes.

The Department of Energy did not respond to a query from The Irish Times .

In a parliamentary response several weeks ago, Minister for Energy Pat Rabbitte seemed to suggest that the department had no role. The impression given was that it was a private contractual matter between Bord na Móna and JHM Crops.

1 Civil War rape which led to pregnancy recalled in new TV documentary
2 Martin ‘seriously concerned’ at Covid complacency amid pressure over church events
3 The far right rises: Its growth as a political force in Ireland
4 The Sack of Balbriggan: The burning of a town that shocked the world 100 years ago
5 Coronavirus: Public health experts considered idea of moving Dublin to Level 4
Real news has value SUBSCRIBE