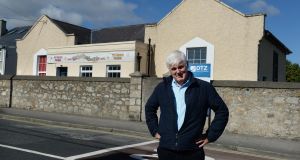 Commemoration ceremonies honouring the men and women of 1916 have continued at national and local level across the State throughout this centenary year. But, ironically, residents of the Sandycove- Glasthule of south Dublin area are faced with the proposed demolition of a building with significant historical relevance for one of the 16 executed leaders.

A former Church of Ireland national school, St Paul’s on Adelaide Road, Glasthule, currently operating as a creche, is believed to have once included among its pupils a young boy who would in time become famous for his pioneering work in human rights, and ultimately as one of the leaders of the 1916 Easter Rising.

Roger Casement, who was born in Sandycove in 1864 and lived there until he was about nine years old, is likely, as a Church of Ireland child, residing about 400 metres away, to have attended the school.

Following the death of his mother, the family then moved north to his father’s native county, Antrim. Casement began working in a shipping office in Liverpool when he was 16 and within three years was on his way to Africa as a ship’s purser.

His subsequent career in the British colonial service in Congo, Brazil and later Colombia, indicates he was a fearless and fair observer, as well as a gifted journalist. His reports on the horrendous conditions imposed upon native labourers involved in the farming of rubber shocked the world.

He was knighted by the British crown, the same authority that would ultimately find him guilty of treason and sentence him to death by hanging, discredited as much, if not more, for his sexual orientation as for his part in the Easter rebellion.

Soon after his resignation from the colonial service, Casement had joined the Irish Volunteers. On the night before his death he became a Catholic, taking his mother’s religion. While the Somme battle continue to rage in Europe, he was hung. An intrusive autopsy after his execution on August 3rd, 1916, the second anniversary of the start of the Great War, saw his body being placed in a grave in the grounds of Pentonville Prison and covered with quick lime.

Years of negotiation finally secured the repatriation to Ireland of Casement’s remains. His wish was to be buried in his beloved Co Antrim. The British government refused permission. On March 1st, 1965, after two days of lying in state, the exhumed casket containing his remains was taken by gun carriage through Dublin to Glasnevin cemetery where its rests in the Republican plot.

Gerry Jones, a Sandycove resident, remembers the reburial of Roger Casement. “I would have been a few months short of seven, but even then I had an awareness that this person must be very important.

“The funeral was a big event. I’ve always been interested in history, particularly Irish history from about 1870 onwards, and became fascinated with Casement and his work as a humanitarian. He was a great man and although I am not a historian, I have researched his life very closely.

“St Paul’s would have been in easy walking distance of the cottage he was born in – that site is now occupied by a modern house with a memorial plaque. It would be a shame to lose the school; it’s such an obvious place for a Casement museum and it’s in very good condition. It’s an ideal exhibition-sized building with a large hall and several smaller rooms and it was here, in this area, where his life began and the early part of it took place.”

According to Mr Jones, there is a great deal of interest in Casement in Sandycove and Glasthule.

“It was very strong even before this centenary year; we are proud of him and his achievements. Many of us here are preparing objections to the planning application; some of them are already lodged.”

The planning application, made by a company named Serbeam, to Dún Laoghaire-Rathdown County Council consists of the proposed demolition of the school and the erection on the site of four townhouses.

The school, which features on the Ordnance Survey map of 1867, is understood to have been completed post-Famine in the late 1840s. It is a traditional structure, typical of 19th century Church of Ireland national school buildings and a familiar design throughout the State.

“I have to say I was shocked” said Mr Jones, “when a member of Dún Laoghaire-Rathdown council assured me that the demolition would go ahead. He said ‘We’ve enough heritage around here’. How can that be justified? I would have thought we’ve more than enough townhouses.”

St Paul’s was in use as a school until the mid- to late-1960s when a number of Church of Ireland schools merged. The school building, which has remained in continuous use, was then acquired by St Vincent de Paul and was, for many years, a community centre. In about 2007, the St Vincent de Paul trust sold it. Since then it has housed a creche, Apres School. The building was sold in May.

Mr Jones commented: “Aside from its historic value, St Paul’s is of architectural interest. It has never been derelict. Here we have an intact early mid-19th century building. I am currently forming a group dedicated to saving the school, with the intention of preserving it as a valuable historical centre.”