An event has taken place to mark the 200th anniversary of Dublin’s Ha’penny Bridge. It was the first cast iron bridge to be erected in Ireland and the only pedestrian bridge to be built over the Liffey for 184 years. Video: Bryan O'Brien 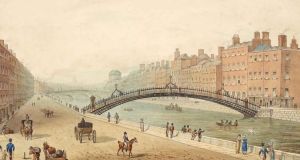 They have been crossing it free of charge for a whole century now, but Dubliners have a long memory.

So, although it was first named in honour of the Duke of Wellington and later rechristened Liffey Bridge, one of the city’s favourite postcard images will turn 200 this week still known universally by the name that trumped the others: Ha’penny Bridge.

A ha’penny was the toll – each way – that one William Walsh was allowed to charge for 100 years after his bridge replaced an old ferry crossing in May 1816.

And modest as it sounds, it was sometimes controversial.

As late as 1861, an angry letter writer to The Irish Times complained about the way commuters were being hit, coming and going.

It was suggested that many took long detours to avoid the charge.

It remained contentious – if only for the inconvenience – as late as the 1916 Rising, during which combatants from both sides reported the toll-keepers attempting business as usual.

But, aptly, that was the year the bridge was finally liberated. 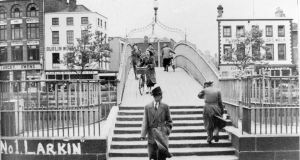 200 Years of the Ha'penny Bridge Click through for gallery

And although Dublin Corporation fretted about whether the old ironwork could cope with the increased traffic, the structure somehow maintained its integrity.

Even in the toll days, not all its critics were economically motivated.

The aesthete and art collector Hugh Lane, who could afford the halfpence, once dismissed the bridge as ugly and suggested a dramatic replacement, courtesy of a friend, architect Edwin Lutyens.

Their combined efforts would have meant a river-spanning art gallery, housing Lane’s collection.

WB Yeats heartily approved, foreseeing a piece of Florence on the Liffey.

But potential corporate sponsors, including the controversial businessman and politician William Martin Murphy, were less enthused.

A bitter Yeats wrote about grubbing financiers whose only ambition was to “fumble in a greasy till/and add the halfpence to the pence”. The Ha’penny Bridge, meanwhile, endured.

Eventually, age caught up with the bridge. In 1987, the structure was found to be subsiding at a rate faster than the Leaning Tower of Pisa: three inches in 17 years.

By 2001 it needed a £1.8 million restoration, during which Dubliners had to cross the river on a pontoon.

However, in the wake of the Belfast Agreement, Harland and Wollf had a role in the refurbishment, as another North-South body looked on approvingly.

Since then, the biggest threat to the bridge has been “love locks”; a 21st-century scourge of metal railings in romantic places.

But after early tolerance, such aberrations are now quickly removed. So considering its age, the bridge is in pristine condition for its 200th birthday.

The event will be marked on Thursday by a ceremonial north-to-south crossing at 12.30pm, involving descendants of those who commissioned and built it.

This will be followed by talks on the bridge, from 2pm to 4pm at City Hall.

There is no admission fee – not even a ha’penny – but it will be first come, first seated.