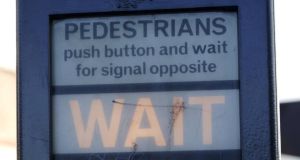 Prof Jan Gehl said Ireland and other former British colonies “have allowed traffic planners to exert undue influence, with silly ideas like every time a pedestrian approaches a crossing, they have to ‘apply’ to cross the street when it should be a human right”.

He found it astonishing there was nowhere to sit in the city’s principal retail precincts, Henry Street and Grafton Street, “no park benches or outdoor cafés – just shop, shop, shop”.

Invited by the Irish Planning Institute to give a lecture on liveable cities, he said it was a remarkable fact that not one of the 35 “most liveable” cities in the world were in Britain or most of its former colonies.

“That’s because they have allowed traffic planners to exert undue influence, with silly ideas like every time a pedestrian approaches a crossing, they have to ‘apply’ to cross the street when it should be a human right.

“And often you can’t go directly across, but to a traffic island, and then you have to ‘apply’ again. The aim is to make motorists happy and pedestrians miserable – in the midst of all the graffiti of road markings on tarmac.”

‘Get along, get across’

While acknowledging there had been improvements in some areas, such as the much wider footpaths on O’Connell Street, he said Dublin was still “dominated” by British traffic planning ideas that gave priority to cars.

“It’s typical of such thinking that, whenever there’s a drive-in, even by one car per day, the sidewalk is cut or dished to cater for it, instead of getting the car to cross the sidewalk. I’ve seen this everywhere in former British colonies.”

Calling for a “thorough workover” to cater for the “enormous number” of people on the streets, he said the city needed to remove parking spaces, revert to two-way streets and make things “a little bit more difficult for car commuters”.

Having worked in many cities abroad, Prof Gehl said his proposals were often first seen as “funny ideas from Europe”, but they had been adopted even in New York City, where a vigorous cycling culture had developed in recent years.