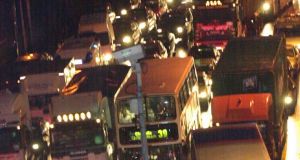 Dublin is up there with Rio, Moscow and Warsaw when it comes to traffic congestion.

The global index found Dublin was in the top 10 most congested cities alongside Mexico City, Istanbul and Rio de Janeiro.

It found Dublin is the sixth most congested city in Europe with a congestion of 35 per cent – meaning, on average, travel times in the city were 35 per cent longer than they would be in free-flowing, uncongested, conditions.

The figures mean drivers face a delay of 43 minutes for every hour they drive in peak periods and drivers with just a 30-minute commute waste 96 hours a year stuck in traffic jams.

The data reported by TomTom units installed in vehicles in the city showed the most congested day in Dublin in 2013 was Friday, October 18th.

The worst days of the week for traffic jams are Tuesday mornings and Thursday evenings.