GoCar users will not be charged for pay-and-display parking 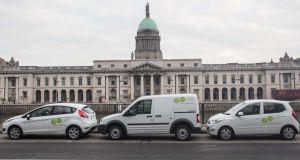 GoCar: city dwellers can now avail of a pool of cars parked around the capital, paying for them by the hour. Dublin City Council’s 30,000 pay-and-display car parking spaces can be used by car clubs for the first time. Photograph: Conor McCabe

It’s been on the go for quite a while in other European capitals like Paris and Berlin, but Dublin is finally getting a fully-fledged car-sharing scheme, backed by a new set of city bylaws that took effect yesterday.

Anyone with a driving licence can now hire a GoCar vehicles by the hour from the pay-and-display parking places in the capital, including Arran Quay, Barrow Street, Clontarf, Docklands, Donnybrook and Stoneybatter.


Membership fee
But first, you have to sign up for GoCar and get your smartcard. There is a one-off fee of €50 to join and then a monthly fee of €5. You then pay for each trip you make.

Members using on-street GoCars will not be charged for parking at any pay-and-display space as this is covered by the permit fee GoCar pays to the city council.

A spokesman for the council said other operators could apply for licences to run on-street car clubs from some 30,000 pay-and-display spaces – although, obviously, the vast bulk of them will be retained for short-stay parking.

“Dublin City Council wants car clubs operating from on-street parking spaces because we believe they will play an important role in improving traffic management in the city,” Mr Quinn said, as it would reduce the need for people to have their own cars.

“Research shows that the number of miles people drive goes down and there is an increase in walking and cycling as car clubs become established,” Mr Quinn said. The same happened after the DublinBikes scheme was introduced in 2010.

Mr Brady described the new scheme as a “big turning point” as it would give members “convenient and affordable access to vehicles right across the city” – in distinctive white hatchbacks with the green GoGar logo.

“Car clubs like GoCar have been hugely successful in a host of major European and US cities to date and the concept is rapidly catching on now in Ireland,” he added.