Dublin city centre has no new houses or flats for sale

Only 15 developments across Dublin have properties available for less than €300,000 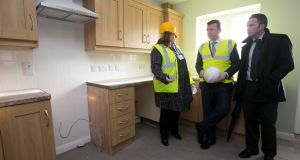 Numbers recently compiled by the four Dublin local authorities show that of 56 newly built housing schemes currently on sale in Dublin city and county, only 15 have homes available for less than €300,000 – the Coalition’s “starter homes” threshold.

Just eight of the 56 developments have apartments for sale and, of these, only two are in the city council area.

All are significantly above the affordability threshold and outside the city centre.

The Department of the Environment’s senior planner, Niall Cussen, said the figures represented a “hollowing out” of the city centre.

Estate agent Sherry FitzGerald said the three-beds had all sold and the three or four two-bed apartments remaining were priced at €475,000 to €570,000.

Further up the price scale is 55 Percy Place, which has recently gone on the market. It is offering 12 two-bedroom apartments on the Grand Canal near Baggot Street from €750,000 to €1.25 million.

While residential construction was up nationally by 15 per cent last year, it fell 12 per cent across the four Dublin local authorities.

In an attempt to stimulate construction, new mandatory standards, reducing the size of apartments that could be built in Dublin, were introduced last month.

However, the smaller sizes have drawn criticism from some sections of the construction industry.

The largest number of completed housing schemes is in the Dún Laoghaire-Rathdown area where 22 developments have recently been completed. Four of these are yet to be put on the market and four involve apartments.

Fingal has 17 housing schemes with units for sale but just one, a development in Portmarnock, has apartments, while in the South Dublin council area 10 housing developments are on the market, again with only one with any apartments on offer.

In the suburban parts of Dublin city, three developments have houses under €300,000.