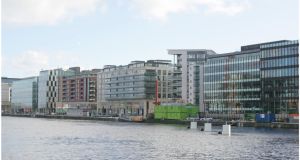 Capital plan: Studio apartments, for rent only, could be built in Dublin if proposals for are accepted. Photograph: Bryan O’Brien/The Irish Times

New studio apartments, for rent only, could be built in Dublin if proposals for the next city development plan are accepted by councillors.

The proposed draft development plan for 2016-2022 would also allow an additional three storeys on city-centre apartment blocks, increase the permissible number of one-bedroom apartments by 50 per cent and would treble the amount of single-aspect apartments allowed in a development.

The document, sent to councillors this week by management, has been broadly welcomed by the Construction Industry Federation and Society of Chartered Surveyors Ireland, and follows recommendations of the Housing Agency and Department of the Environment.

Certain rules would apply to the new category. The studios would only be permitted in “build-to-rent” schemes of more than 100 apartments which have communal facilities such as common rooms and gyms. The complexes, which can only be in the inner city or docklands, must be in single ownership for at least 20 years, during which time they cannot be sold off piecemeal.

The document proposes reducing the required number of dual-aspect apartments in any complex. The current plan requires 85 per cent of apartments to have windows on two sides: this would be cut to 50 per cent. The ban on north-facing single-aspect apartments would be lifted if they faced a “substantial water body or designated open space”.

Changes are also proposed to the height of blocks. Previously this was expressed through the number of storeys. The new plan would set a maximum number of metres. Through most of the the inner city this would be 28m, which would bring the storeys permitted in “low-rise” apartment blocks from six to nine.

Councillors have until August 14th to make submissions, before a council meeting on September 16th; then they will go on public display.