Demolitions will not cost 'big money'

Banks and local authorities to work together on demolition plans 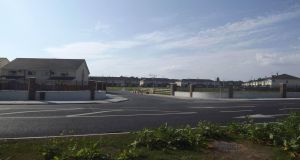 Minister of State for housing Jan O’Sullivan confirmed she had drawn up a provisional list of 40 estates that would be suitable for demolition next year.

The planned demolition of 40 ghost estates and restoring the land to its former use will not cost the State “big money”, Minister for Finance Michael Noonan has said.

Lending his support to the plan, he said there was no point having half-built houses standing “as a monument to the skeleton of the Celtic tiger . . . In the interests of safety they should be knocked”.

He was speaking in Limerick yesterday after Minister of State for housing Jan O’Sullivan confirmed that she had drawn up a provisional list of 40 estates that would be suitable for demolition next year.

Ms O’Sullivan said the decision on whether to clear the sites would be taken by the relevant banks and developers in conjunction with the local authorities rather than her department.

The 40 estates are located in such areas as Leitrim, Roscommon, Cavan and Longford where there is less demand for houses and the land can be returned to agricultural use.

A spokesman for Ms O’Sullivan said there was no plan to publish the list nor would it be contained in a forthcoming progress report on what do with the State’s more than 1,700 ghost estates. “There is an ownership issue and we don’t want to interfere with anyone’s ownership rights by putting a name on them,” he said.

Industry sources said it was difficult to give an accurate prediction of how much such demolition work would cost, saying it depended on the quality of restoration required. “You could cover things up with topsoil with some drainage and that would leave it for parkland usage or grazing sheep, but it wouldn’t be first-class agricultural land for growing wheat and barley,” said one industry figure.

“You don’t just want to plough them over so you get a brick field,” he said. “We should be trying to put them back to how they were. It needs a bit of thought, and one of the big problems is finance. A lot of the developers have gone bust so where will the finance come from?”

The Department of the Environment has allocated €10 million to completing unfinished estates next year but has no specific budget for demolition. It is hoping to persuade the banks that they can realise greater value on their assets by clearance, and eliminating security and other costs in the process.

In certain cases, local authorities may also be able to use legislation on derelict and dangerous sites to force the banks to take action.

Mr Noonan, when asked whether the taxpayer would be footing the bill, said he understood the Department of the Environment had some money available. He added: “In the overall scheme of things I don’t think we are talking about very big money. Basically it is for work for bulldozers and JCBs. It’s for knocking half-built developments. Houses where the blocks are laid, the foundations are in, but very little else has happened and they are just laying there with weeds growing up through them.”