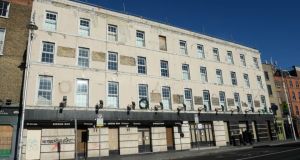 The demolition and redevelopment of a Dublin hotel associated with James Joyce’s Ulysses has been refused by Dublin City Council.

Plans for the replacement of the Ormond Hotel on the north Liffey quays with a 170-bedroom six-storey hotel, along with a new pub, were rejected by city planners as “monolithic” and “unsympathetic” to the surrounding area.

Monteco Holdings had applied for the development at the site of the old Ormond Hotel, which has been closed since 2006, and two adjoining properties.

In its plans it argued that the original fabric of the hotel no longer existed and that the literary associations would be best preserved through the retention of the name of the hotel, the erection of a tourism plaque, and the use of the name ‘Sirens’ for the bar.

The James Joyce Centre was among several objectors to the development on the site of the hotel which was the setting for the Sirens episode of Ulysses.

However the council in its ruling made no reference to the historical or cultural context of the hotel, but rejected the development for the effect it would have on the existing area.

The development would “seriously injure” the surviving grain, rhythm and character of Ormond Quay Upper that forms part of the Liffey Quays Conservation Area . it said. The orientation, height and proximity to adjacent residential buildings, would make the development “visually obtrusive” when viewed from existing windows and result in loss of daylight, it said.

The scale and “robust character and design” of the proposed development would be overdominant and seriously injure the setting of an adjacent protected structure, number 6 Ormond Quay Upper , it said.

“Therefore the proposed development would be contrary to the proper planning and sustainable development of the area,” the council said.