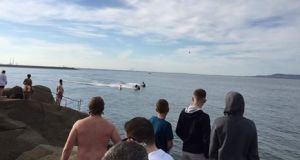 Dún Laoghaire Coast Guard has hit out at a group of jet skiers who “put swimmers’ lives in danger” by using the Forty Foot as a “race course”.

Large numbers were attracted to the area by Friday’s fine weather, but bathers were forced to abandon the normally tranquil waters when an entourage of two jet skis and two power boats arrived on the scene.

According to witness accounts those piloting the vehicles began weaving between yellow water safety markers which designate the limits of safe swimming areas, churning up the waters and sending large waves towards the shore.

Members of the Dún Laoghaire Coast Guard were dispatched to the scene and the jet skis and power boats left the area soon afterwards.

In a post on its Facebook page the local Coast Guard described the actions of the individuals involved as “reckless”.

“Dún Laoghaire Coast Guard was contacted and dispatched a team to investigate. On arrival, 2 jet skis and 2 power boats were spotted acting recklessly. Within minutes of the seafarers seeing the Irish Coast Guard members, they stopped and left the area.”

Jet skis can only be operated up to 10am and after 7.30pm in the Dún Laoghaire Rathdown area

The Coast Guard unit outlined the requirements which must be satisfied in order for someone to operate a jet ski, including the need for a permit from the local council.

Jet skis can only be operated up to 10am and after 7.30pm in the Dún Laoghaire Rathdown area, and must stay 300m from the foreshore following launch.