Councils may have to ‘prioritise’ flood repairs over roads 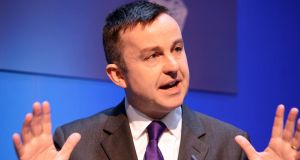 The protection of homes rather than beaches will be the priority for Government spending on flood defences, Minister of State Brian Hayes has said. Photograph: Eric Luke / The Irish Times.

Local authorities may have to spend money intended for roads on bolstering and repairing flood defences, Minister of State Brian Hayes has said.

Speaking in Co Kerry today, Mr Hayes, who is responsible for the Office of Public Works, said the protection of homes rather than beaches should be the focus of money spent.

“We can’t mount a flood defence for every acre of land in the country,” he said, adding that funding would have to be prioritised “to maximum effect.”

Mr Hayes said people, homes, businesses, agricultural land are the priority “in that order”. He said there may be special funding for tourism infrastructure.

Co Kerry has the longest coastline in the country and several blue flag beaches have been severely damaged by the recent extreme weather.

Mr Hayes was shown the damage done during recent storms to paths and a sewage treatment plant at Fenit, and he said his message to the county council in Kerry and other coastal areas was “keep spending the money”.

“We have been saying to them (councils) keep doing the work and we’ll fund them afterwards.”

Pressed on how much money exactly would be available, Mr Hayes said there was a limit and that he was speaking about minor rather than major works, such as depositing giant sandbags.

Mr Hayes also said he wished to be frank, and the reality was “councils will have to prioritise.”

This would mean that this year certain roadworks would not go ahead as the money shifted to repair the flood defences.

Mr Hayes also said there was no guarantee the Government, which is to hear details of the scale of flood damage at a cabinet meeting on Tuesday, would be paying the full bill of €65 million submitted to the local government agency by local authorities.

She said that out how out of a total spend of almost €290 million on flood Capital Works carried out by the OPW since 2002, only €1 million or 0.3 per cent had been spent in Co. Kerry the county with the longest coastline.

“Nobody expects the Government to be able to stop the force of nature, people do expect a more urgent response and better strategic planning,” she said.