Council in talks to buy €5m Fernhill House and Gardens 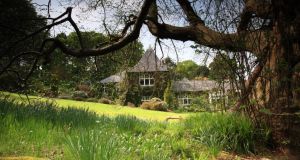 Dún Laoghaire-Rathdown County Council is in negotiations to buy Fernhill House and Gardens in Stepaside, one of the most extensive gardens in south Dublin.

Dún Laoghaire-Rathdown County Council is in negotiations to buy Fernhill House and Gardens in Stepaside, one of the most extensive gardens in south Dublin.

If the council is successful, it is understood it would buy the house and lands for €5 million for use as a local amenity.

The property was purchased by developer David Arnold for approximately €45 million in 2008 and was subsequently taken over by Nama.

The site covers some 84 acres, more tha half of which are wooded. The property is close to housing developments at Park View, Belarmine and Aiken’s Village. The area has been identified as being in need of a public park based on the high density housing developed over the past 10 years. The estate was open to the public but has been closed for the past number of years.

“The council acknowledges that the provision of a public park at Fernhill Gardens would add to the amenity of the locality and provide for an excellent recreational opportunity, particularly for residents at Stepaside and adjacent new residential development,” a council spokesman said.

“While there would be costs associated with the acquisition, development and maintenance of the park were it to be acquired, the executive will pursue the matter.”

Located 11km south of Dublin on the Enniskerry Road between Sandyford and Stepaside, Fernhill gardens were begun in the early 19th century and enlarged and developed by their owners over the decades, including the Walker family who owned the property from 1934 onwards.

The gardens contain rare collections of plants, trees and shrubs, including specimen rhododendrons and magnolias.

“We are delighted that Fernhill is on the brink of being saved. The news that negotiations between Nama and the council are at an advanced stage promises a realistic hope of a much needed vital amenity area for the Stepaside, Sandyford and Kilternan areas.”

Mr Ross and Mr Daly said that once the amenity is purchased, they will continue to campaign for Fernhill House and its immediate surroundings to be preserved.

“The unique collection of plants , trees and shrubs nurtured by the Walker family over m any decades must not be left to the tender mercies of property developers or builders. The council should consider selling the house to a buyer as a residence to offset some of its cost for the magnificent 83 acres that it is on the point of purchasing,” they said.

“Stepaside, Sandyford, Glencullen, Kilternan and this area of South Dublin desperately need a public park of such high quality. Fernhill, with its special landscape must be protected from developers. Its rare collection of camellias, magnolias and rhododendrons fits the bill perfectly.”