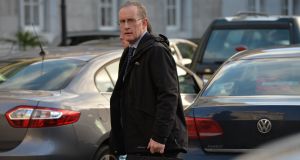 Dublin City Council will not be able to rehouse the residents of the Longboat Quay apartment complex if it is evacuated, council chief executive Owen Keegan has said.

Dublin Fire Brigade has issued a fire safety notice giving residents of the 299 apartments, built in 2006 by developer Bernard McNamara, until November 1st to start fixing the defects in the complex. Failure to comply with the fire notice could result in evacuation of the building.

Mr Keegan said on Monday night the council had “no direct role” in relation to the complex and said it was “blindingly obvious” the council would not be in a position to source accommodation for the almost 900 residents.

The authority and Nama last week made an offer of €2.75 million, but this includes almost €1.25 million already spent by the DDDA on the installation of fire alarms. Residents said the offer was “wholly unacceptable” and insufficient to allow work to begin. Costs have been estimated at more than €4 million.

However, he said an offer of funding towards the repairs “without the admission of liability” had been made by the authority and Nama.

Residents met Lord Mayor of Dublin Críona Ní Dhálaigh ahead of last night’s meeting. “How can we have a situation where all these people could be rendered homeless and nobody held accountable?” said Ms Ní Dhálaigh of Sinn Féin.

Fianna Fáil’s Jim O’Callaghan said Mr McNamara had “a moral obligation to step up to the plate”. Fine Gael’s Kieran Binchy said the council had a “moral and legal responsibilty to ensure not one person is made homeless”. Independent councillor Mannix Flynn said residents “should not be strong-armed into paying any money”.

Residents are due to meet Minister for the Environment Alan Kelly on Tuesday. Speaking after Monday night’s meeting they said they were “bitterly disappointed with the completely inadequate progress” made to date.