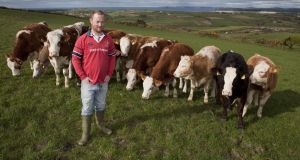 Tommy Moyles: reckons it is a time for “cool heads” in agriculture on the climate change debate.

As he walks his land overlooking the sea at Ardfield near Clonakilty in Co Cork, Tommy Moyles speaks about seeing a peregrine falcon in full dive after its prey, and how choughs have returned and are thriving on the larvae in dung now that his farm has been converted from tillage to beef.

Describing his approach to beef farming as “holistic”, Mr Moyles (34) sees his role in agriculture as being as much about being a protector of the land as a producer of premium beef from his 65-strong Simmenthal herd.

And he is also keenly aware of the impact of climate change – a Nuffield Scholarship which allowed him to travel to the United States, Australia and Africa to see farming in other climes led him to appreciate how fortunate Irish farmers are to operate in such a favourable environment.

“I visited one farm in Queensland where one summer they had plenty of rainfall and good grass growth.

“The following summer there was no rain at all and the land was baked dry and yet they manage to make a living there farming. It’s all about adapting to your conditions.”

This is the highest of any developed country but the high figure is skewed, Mr Moyles argues, by the fact that Ireland does not have any heavy industry.

He acknowledges Ireland must try to reduce its carbon emissions by 40 per cent by 2030. At first glance, this seems incompatible with plans to expand the Irish dairy herd from 1.2 million animals to 1.5 million by 2025 but he says the move needs to be put in an international perspective.

“It’s a big expansion but we visited the International Livestock Research Institute in Kenya where they’re hoping to get smallholders to go from milking one cow to two cows; it doesn’t seem a lot at first but they have 10 million smallholders so that’s 10 million more cows.”

Mr Moyles reckons it is a time for “cool heads” in agriculture on the climate change debate but he is not averse to farmers adapting.

He points out that, with a strong clover content in his grass, he has reduced his artificial nitrogen usage from 26 tonnes to 14 since 2012.

He is quick to acknowledge he is fortunate to be able to put cattle out to grass for about 300 days a year due to the mild climate, thus reducing the need for grass silage and other fodder indoors but he believes farmers don’t always appreciate “the power that is in grass”.

“Grazed grass has a higher digestibility and lower emissions so we have an advantage over countries where animals are fed indoors and we should capitalise on that.”