COP21: US west coast leads the way on climate agenda

California governor Jerry Brown: ‘We are growing 25% faster than rest of the country’

In Montreuil in eastern Paris a large alternative to COP21 is taking place. There activists hold little hope for the outcomes of the summit. Harry McGee reports. 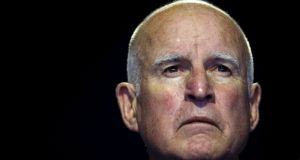 California Governor Jerry Brown: “Whatever we do to prevent a calamity is a cost-effective move.” Photograph: Reuters

Governor Jerry Brown of California has been one of the most colourful figures in US politics for at least 40 years. He trained as a Jesuit priest, but became a lawyer instead. He dated the singer Linda Ronstadt and successfully sued Standard Oil, Gulf Oil and Mobil Oil.

At a seminar on “subnational leadership” at the UN’s COP21 climate summit yesterday, Brown (77) was cantankerous and outspoken, calling Republican climate sceptics “the mindless opposition”, “knuckleheads“ and “troglodytes”.

At COP21, one often has the impression that local and regional leaders and civil society are streaks ahead of the negotiators. Two organisations co-ordinating a worldwide movement to withdraw investments from fossil fuels, 350.org and Divest-Invest, have received pledges from 500 institutions to disinvest, representing more than $3.4 trillion in assets.

Some 1,000 mayors from cities around the world have embraced the long-term goal of using 100 per cent renewable energy and reducing greenhouse gas emissions by 80 per cent over the next 35 years.

As members of the “Pacific Collaborative”, California, Washington state and British Columbia did not wait for an international agreement.

California was once the dirtiest state in the US. Thanks to former governor Arnold Schwarzenegger – and Brown, his successor – it is now one of the cleanest, with the most aggressive environmental policies in the country.

Schwarzenegger established a cap and trade system, whereby polluters buy allowances. Brown has set up a carbon market with Quebec, and is negotiating similar deals with Chinese provinces. China has just adopted California car emission standards, the strictest in the US.

Brown says small businesses “pooh-pooh climate change because they don’t realise it’s a huge threat to California and the world . . . they think it’s a left-wing idea. They think requirements for zero-emission vehicles and renewables portfolios are government regulation, which is bad according to their ideology.”

Gregor Robertson, the mayor of the “green” city of Vancouver, said the Canadian city “busts the myth that the economy and the environment are at odds.” Vancouver refused to accept a pipeline and oil terminals that would have brought petroleum from Alberta.”

Brown said: “We have regulation and we have tax [in California] but we are growing 25 per cent faster than the rest of the country.

“Republicans say climate change is a job killer, but if world temperatures rise 3 degrees, it will cost trillions. Whatever we do to prevent a calamity is a cost-effective move.”