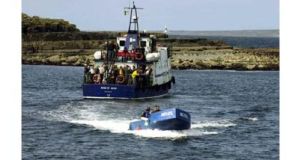 The contract for the construction of a new €6 million pier in Doolin, Co. Clare, has been signed.

Work on the pier is due to begin in the next few days with completion expected by mid-2015.

The development was given the go-ahead last year amid opposition from surfers who argued it would negatively affect the world-class surfing spots of Crab Island and Doolin Point.

Today, Clare County Council signed a contract with L&M Keating, the successful tenderer for the construction of the pier.

Clare county manager Tom Coughlan said he was “delighted that construction of this vitally important piece of infrastructure will commence shortly following years of open debate and extensive consultation with users of the pier, as well as the local community.”

County mayor Joe Arkins said the project has been “long sought after by ferry operators, fishermen and tourists who use the pier. The new pier development will boost visitor numbers in Clare considering access to the Aran Islands from the county will be greatly enhanced once the project is completed.”