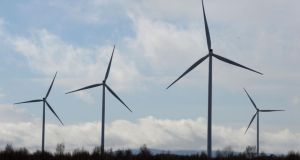 An Bord Pleanála has been told that the consultation process on a wind farm development in Co Meath has been ‘hopelessly inadequate’. File photograph: Dara Mac Dónaill/The Irish Times.

Consultation with a Co Meath community in relation to a wind farm development has been hopelessly inadequate and does not meet standards set down in European legislation, an oral planning hearing has been told.

The €240 million Emlagh wind farm development involves 46 turbines, each up to 169m high, on three land clusters at Farragara, Castletownmoor and Ísealchríocha near Kells.

The project has been assessed as a strategic infrastructure development, with An Bord Pleanála making a decision on the planning application.

North Meath Wind Farm Ltd, whose majority shareholder is Element Power Ireland, claims that, if permission is secured, the wind farm will generate substantial electricity for up to 30 years, as well as 225 construction jobs and 60 long-term jobs.

There will also be €3.5 million provided for local projects.

Miriam Reilly and Ronan O’Loughlin, of Curraghtown House, a protected structure near the site, told the An Bord Pleanála hearing in Kells that they had poured 10 years of their lives into the house.

They felt there would be a huge social and economic impact on their family if the development went ahead and that they would be forced to move away.

Ms Reilly told the inspector she believed the consultation did not meet the requirements set down in the Aarhus Convention, which sets out rules for the involvement of citizens in environmental matters, and in European legislation.

Ms Reilly said the health and wellbeing of her family would be affected by the project and she wanted to know what community benefit was weighed in the balance against that.

Counsel for the applicant, Jarlath Fitzsimons SC, rejected the claims of Mr O’Loughlin and Ms Reilly and said it was clear that considerable analysis had been provided in the environmental impact assessment in relation to the historic value of Curraghtown House and the likely impacts of the development.

Mr Fitzsimons said the owners of the house were entitled to disagree, but they were not entitled to say the assessment had been misleading, or to “simply baldly submit that there’s an effort to mislead the board”.

He said that this was a “reprehensible” allegation and should be withdrawn.

Mr Fitzsimons said that there was also no consistent evidence that wind farms caused adverse health effects in humans, and that this had been accepted by the State’s deputy chief medical officer and the Minister for Health.

Mr Fitzsimons rejected claims made by a town planner at the hearing, in which she stated there had been no assessment of the potential impact on the equine industry in the area.

Counsel said that there would be no risk of any impact on ground water resources, as had been stated, and rejected claims that the energy generated by the proposed wind farm was to be exported to the UK.

Historically, the wind farm was to be part of a project that would have exported renewable energy to the UK grid, but that had not been the case since the end of 2013.

The hearing continues next week.