US climatologist to deliver public lecture at TCD this evening 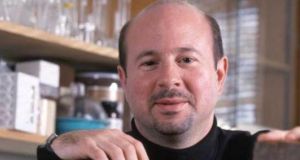 American climatologist Michael Mann: to use Hockey Stick graphic to ‘cut through the fog of disinformation’ on climate change.

Official confirmation last week that 2014 was the hottest year on record “should put to rest the absurd notion of a ‘pause’ in global warming”, according to leading American climatologist Michael Mann.

Dr Mann, director of the Earth System Science Center at Pennsylvania State University, was referring to an argument used by climate change sceptics that there had been no rise in average global temperatures for the past 16 years.

In advance of a public lecture at Trinity College Dublin this evening, he said the claim was part of “an effort by fossil fuel interests and those doing their bidding to attack the science and confuse the public about . . . climate change”.

Dr Mann, who has been under attack from such sceptics, will talk about criticisms of him by American politicians and others opposed to reducing carbon emissions. He says “fighting back in a way I consider to be most effective” was his response.

Central in the controversy has been “The Hockey Stick”, a “simple, easy-to-understand graphic” constructed by him and his colleagues to depict changes in Earth’s temperature over the past 1,000 years.

When right-wing political commentator Mark Steyn described the graphic as “fraudulent”, Dr Mann responded by filing a libel action against him. He has documented the row in a 2012 book, The Hockey Stick and the Climate Wars.

In his lecture, he will reassert that climate change “is (a) real, (b) caused by human activity, and (c) a threat to humanity” and blame fossil fuel interests for the lack of progress in addressing it.

He will use the Hockey Stick graphic to “cut through the fog of disinformation” on climate change, highlighting the “uneasy relationship between science and politics, and the dangers that arise when special economic interests . . . attempt to skew the discourse”.

Dr Mann will talk about his experiences as “an involuntary and initially reluctant public figure in the battle over climate change” and cite his young daughter as a reminder of “our ethical obligation to preserve the planet for our children and grandchildren”.