Climate change: Will Ireland’s coastal cities and towns be under water? 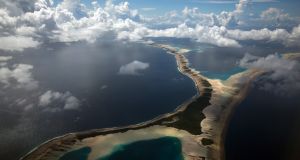 Sea levels are rising, and rising faster every year. The two main factors are related to global warming: the water from melting land ice and the expansion of sea water as it warms. According to the Intergovernmental Panel on Climate Change, estimates for the 20th century show that global average sea level rose at a rate of about 1.7mm a year but satellite data collected since the 1990s shows that this now stands at 3mm per year. The panel says sea levels are likely to rise on average by another 300mm to more than 500mm by the end of this century. The trend puts thousands of coastal cities, such as Venice, and islands at risk. However, the rise is not uniform – in some regions, rates are up to several times the global mean rise, while in other regions sea level is falling. So how will Ireland’s coastal towns and villages fare? The Surging Seas project by Climate Centralhas mapped the likely impact of rising sea levels using predictive modelling. The maps set out how a 2 degree Celsius rise in global temperatures could affect cities around the globe and compares it with a scenario of a 4 degrees Celsius rise. Explore the maps by using the zoom controls and click the “When will it happen” link to read more about the impact.

There are more mapping tools available at Climate Central.