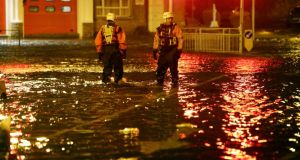 Dr Conor Murphy, a director of the Irish Climate Analysis and Research Units at NUI Maynooth, said that while the Office of Public Works was “very engaged” with the issue of climate change, it was not receiving sufficient attention at Government and local authority level.

Prioritise defences
He said it was not possible to protect all areas of the coast from the effects of climate change and decisions needed to be made as to where spending on flood defences should be prioritised. “We need to discuss our priorities at local level, and those discussions have not been taking place.”

Policy-makers, scientists and communities needed to begin a discussion about the measures that should be taken to adapt to significantly higher rainfalls during the winter, particularly in the West.

He warned that future floods would not be restricted to areas that have been flooded to date.

A pattern of reacting to extreme weather events after they occur, rather than taking proactive steps, was less efficient than planning in advance for what was now expected to occur, he said. “It is a challenge that we have to meet. We have to put in place a process of how we can better deal with this.”

Spending
The cost of what was needed was one of the questions that needed to be addressed.

Scientists expect winter rainfall in Ireland to increase by 10-20 per cent over the period to 2050, with the difference depending on greenhouse gas emission levels.

There is also increased danger from storm systems coming from the Atlantic and an increase in sea levels.

While there has been increased investment in flood defences, the increase is not happening fast enough and does not compare favourably with what is happening in Britain, Dr Murphy said.

Community opposition
He mentioned the recent proposed flood defences for Clontarf, Dublin, which were strongly opposed by the local community. “It is a difficult conversation, but we need to have one between policy-markers, scientists and the community.”

Flood defences could be constructed to protect areas where there were high levels of population and that would otherwise be at risk due to climate change. However, some coastal areas would have to be ceded. “We can’t put defences all round the country,” he said.

While most defences around the State had been built to deal with floods of the order of those seen before, the past was no longer an indicator of what could be expected in the future.

He said that if the Government and local authorities got more involved in trying to counter the effects of climate change, people might be more prepared to take personal efforts to counter the risks.

People’s attitude towards blame and liability could have a strong impact on people’s willingness to take personal measures, he said.

While many people might have thought that climate change was an issue for the developing world, weather such as Ireland is experiencing showed there are also vulnerabilities for Irish towns and cities.