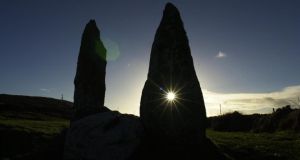 Cape Clear: The council is supplying between 30,000 and 40,000 litres of water a week to the island off the west Cork coast. Photograph: Frank Miller

Cork County Council will deliver the water tanker subject to sea conditions and the availability of a barge.

The council is supplying between 30,000 and 40,000 litres of water a week to the island off the west Cork coast.

In extreme instances, islanders’ access to water was reduced to a trickle and rationed to just a few hours a day.

The problem is compounded by significant leaks in the island’s water infrastructure.

Replacement pipes have been secured but cannot be laid due to the lack of funding to cover the cost of repairing the island’s roads after the work, according to goat farmer and former People Before Profit election candidate Ed Harper.

“These shortages happen every year but this year has been worse than ever. However, a well borer arrived today,” he said. “What we really need . . . is a rainwater harvesting scheme, which could be implemented as part of the planning process for new buildings on the island, but we would need the council to formally agree to this.”

There are two wells serving the island, but the water is too mineralised to drink, he said.