Campaign for Bewley’s and Whytes Academy to be national monument

Building on Grafton Street was once a school that educated Emmet, Moore and Wilde 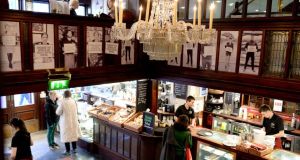 There is a new campaign to have Bewley’s Cafe and Whytes Academy on Grafton Street, Dublin, declared a national monument.

Group founder Damian Cassidy said the “Save Bewley’s and Whytes Academy” group, made up of around 10 people, will meet this weekend to step up the campaign.

Mr Cassidy also founded the Save Bewley’s Campaign in 2004 when it was announced the Grafton Street premises would close.

He has reignited the campaign following Bewley’s announcement that it will shut the cafe in February and reopen in September.

It is spending more than €1 million on refurbishing the protected structure.

This will roughly halve its seating to about 160. Opening hours will be cut, as will employees, to 70.

Mr Cassidy said the building, which once housed Whytes Academy, should be a national monument.

A national monument is a structure or site which has been deemed to be of national importance and so worthy of state protection.

Whytes Academy was a grammar school established in 1758, attended by Oscar Wilde, Thomas Moore, the Duke of Wellington and Robert Emmet.

“We are losing our national treasures simply because there is no power within our planing departments to stay ‘stop’. We have a heritage officer in the city council but they have no power,” he said.

“The Crown Tavern Bar in Belfast was taken over by the British National Trust when it was threatened with closure in the 1970s. Why can’t we have a similar response here?” he said.

“Taoiseach Enda Kenny keeps talking about the importance of tourism and how its the saviour of our economy so we want to have a meeting with him.”

Bewley’s has fought an unsuccessful campaign with its landlord Ickendel Ltd, controlled by property developer Johnny Ronan, to have its €1.5 million annual rent reduced to €728,000, which was suggested by a third-party arbitrator in January 2012.