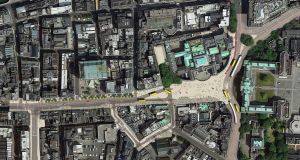 An artist’s impression Dublin City Centre around the Dame Street area showing the pedestrian space in front of Trinity College if Dublin City Council’s plans for College Green go ahead.

Business organisations have raised concerns about plans for the creation of a pedestrian and cycle plaza at Dublin’s College Green.

The new civic space, which would prohibit all traffic from crossing College Green to and from Dame Street, is expected to be in place by June of next year in advance of the beginning of operations of the Luas Cross City line the following September.

The plans, which will see changes and diversions to between 30 and 40 bus routes, and a ban on cars in certain streets, are available for public consultation from now until May 24th at dublincity.ie.

Dublin Chamber of Commerce has called for more information about the potential impact of the changes to College Green on other areas of the city centre.

“Crucially, uncertainty remains as to whether traffic, which will be pushed out of College Green, can be accommodated on other already congested city centre streets.”

Retail Ireland, a division of employers’ lobby group Ibec, said it was eager to see the outcome of the economic impact assessment commissioned by Dublin City Council and the National Transport Authority.

“We welcome that that study is being done. For us there are two critical aspects, that any decisions are made by looking at the hard evidence and that access for deliveries is maintained, that for us is a non-negotiable,” director Thomas Burke said.

Some 150 buses an hour currently go through College Green. Dublin Bus head of operations Donal Keating said there were “pluses and minuses” for the service. “Given the complexity of what has to be done here, I can see why this option was chosen.”