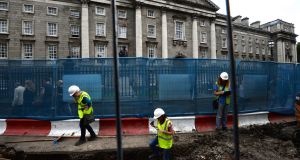 Buses may have to be banned from parts of Dublin’s College Green to facilitate the new Luas Cross City line, a move which would significantly increase bus passengers’ journey times.
The Dublin City Centre Transport Study, published last June, proposed excluding private cars and taxis from the area in front of Trinity College and the historic Bank of Ireland building, one of the most congested traffic thoroughfares in the city. However, Dublin City Council chief executive Owen Keegan said restrictions on traffic using College Green may also have to be extended to buses, because of engineering difficulties and the possibility of delays to trams.
The problem related to buses travelling from Dawson Street and Nassau Street, and their ability to access College Green once the Luas line becomes operational, Mr Keegan said. “Even if we were to allow them [buses], it’s not clear that they can turn left with the Luas at the bottom of Dawson Street. Even turning right might be an issue.”
A possible solution would be for buses to run from Molesworth Street and around the back of Trinity, a far longer route across the city and “not an attractive option”, Mr Keegan admitted. City councillors had been expected at the start of December to approve the structural changes to the road layout of College Green required to accommodate the Luas line, which is currently under construction and will run through College Green from 2017.
However, the matter was not included in the agenda for any council meeting before Christmas after it emerged there were difficulties with the proposed road layout. “We weren’t in a position to go forward with it. There are issues about the quality of the cycling provision and there are difficulties with whether we can cater for buses, those issues are not resolved,” Mr Keegan said.
A final decision will be made early in the new year,  he said. “It’s a difficult one to resolve . . . but the last thing we want to have is a completely congested strategic corridor.”
* This article was edited on Sunday February 7th, 2016.