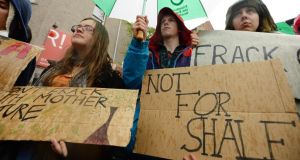 A protest against fracking in Scotland last month. Fears that groundwater will be contaminated in shale gas drilling are “unlikely” to be realised, a major official British inquiry has said. Photograph: Mark Runnacles/Getty Images

Shale gas drilling is safe if properly run and regulated, while fears that groundwater will be contaminated are “unlikely” to be realised, a major official British inquiry has said.

The examination was carried out by Public Health England (PHE), an executive arm of the British department of health.

“However, surface spills, of fracking fluids or waste water, may affect groundwater; and emissions to air also have the potential to impact on health,” it said, though these could be safeguarded against by proper regulation.

Problems with fracking reported elsewhere, notably in the US, were blamed by PHE on “operational failure and a poor regulatory environment”, which means that proper regulation is “essential” if risks are to be minimised in the UK.

Under the process of hydraulic fracturing – better known as fracking – water and a variety of chemicals are injected underground at high pressure to break apart rock formations. Sand follows to keep the gaps open, allowing gas to be released.

Much of the liquid injected is lost, but some – between 10 and 70 per cent, depending on the drilling site – comes back mixed with gases before it is then separated and held in storage tanks on site until it can be recycled.

“Gas exploration techniques, using directional drilling and fracking, are not new and have been used across the oil and gas industry (including in the UK) for many decades. As the technology has improved over time so has the ability to exploit shale gas economically.”

Economic debate
“It has been proposed that the exploitation of shale gas resources has the potential to provide economic and environmental benefit. However, this remains subject to debate.”

Reviewing US medical research, the health body said potential risks from exposure to benzene, ethylbenzene and other chemicals are highest for those living within a half-a-mile of a drilling site – but it warned that the US research is “limited” in its usefulness.

“Control of emissions from shale gas extraction and related activities will be of central importance. Comprehensive air monitoring and associated assessments of health risks will be required in the UK to inform regulation of each phase of the operation,” it declared.

The US experience of fracking generally offers little guide to the UK, since “the well-publicised problems (there) appear to have been due to operational failures and inadequacies in the regulatory environment.