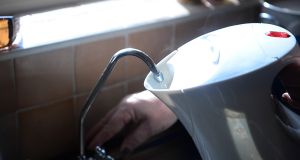 A contamination alert on a water scheme which supplies 46,500 consumers in Co Mayo has been lifted. Photograph: Bryan O’Brien/The Irish Times.

A contamination alert on a water scheme which supplies 46,500 consumers in Co Mayo has been lifted.

Mayo County Council confirmed on Tuesday that it was no longer necessary for people on the Lough Mask Regional Water Supply Scheme and associated group water schemes to boil water to make it safe for human consumption.

The boil water notice was issued by the HSE on September 2nd following the detection of cryptosporidium - a microscopic parasite that causes gastrointestinal illness - in the supply.

Residents in towns in the south of the county, including Castlebar, Westport, Claremorris, Ballinrobe, Balla, Ballindine, Kilmaine, Cong, Ballyhaunis and Knock were affected.

However, daily sampling at the source, at the treatment plant and on the network since the boil water notice was issued did not identify any presence of cryptosporidium.

An independent audit carried out by the Environmental Protection Agency at the plant confirmed that there were significant improvements to the filter management and control at the plant since their previous audit in May 2015.

This was as a result of works undertaken at the plant over the past year and a half. It also stated there was no evidence of filter breakthrough in the lead up to the cryptosporidium detection.

Mayo County Secretary John Condon said the latest tests on the supply indicated an “all clear” for the supply.

The council said no cases of illness had so far resulted from the presence of the parasite in the Lough Mask scheme.

Council chief executive Peter Hynes apologised for any inconvenience experienced by those affected by the boil water notice.