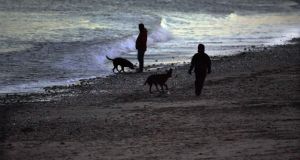 Bathers have been banned from swimming at Killiney beach. Photograph: Cyril Byrne / The Irish Times

The levels of E. coli and enterococci bacteria found in the water at Killiney beach are “significantly higher” than normal, the Environmental Protection Agency has said.

With temperatures set to soar in Dublin this weekend, swimmers will tomorrow find out further set of results on water quality on beaches where bathing prohibitions were introduced on Wednesday. These are Killiney, White Rock (Dalkey), Sandymount and South Bull (Half Moon bathing club).

If tomorrow’s Killiney test result shows contamination has dissipated then bathing will return to normal, EPA chief chemist Peter Webster said. However if levels are still higher than the safe threshold the council has a “bigger problem”, he said . In that case it will have to prevent people from bathing over the weekend and investigate the cause, he said. Killiney also had to temporarily remove its blue flag due to the test results.

However this was Killiney’s “first poor result” for the last four bathing seasons (equivalent to 80 samples),a council spokesman said. The problem with bathing water analysis is that over the course of the day there could be a hundred fold variation, Mr Webster said.

DLR Co Co said “no definite cause” has been identifed for the poor result but it pciked extreme weather when sending results to the EPA because the waters were very rough on the day of the test. The White Rock test results showed only problems with enterococci and not E. Coli.

Dublin swimmers also saw bathing prohibition introduced in Sandymount yesterday however it is unlikely to be the same source as Killiney, Mr Webster said.

A spokesman for Dublin City Council said investigations were “inconclusive”. In order to report the incident to the EPA it had to pick from a predetermined list of pollution sources. The council registered “suspected sewage discharge” but in the comments box said it was unable to identify the source.

While the levels of enterococci at Sandymount were sufficient to introduce the bathing ban they were “not that unusual “ for the beach, Mr Webster said. The city beach’s water test showed relatively low levels of E.coli.

Adrian Conway of Dublin City Council said water quality in Dublin was generally quite good but samples taken on Monday did not meet the required standards. All other tests results at the Sandymount water so far this year were “excellent”.

Mr Conway advised the public against contacting the water or children playing on the beach getting buckets of water. If test results are okay we will be clear for the weekend, he said.

The council has been liaising with the Health Service Executive and the Environmental Protection Agency.