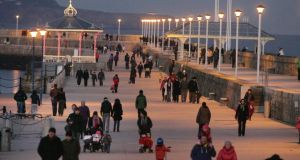 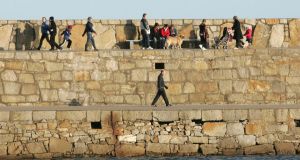 The council has twice before voted to go ahead with the urban beach project at the East Pier in Dún Laoghaire, estimated to cost €2.5 million to construct, including about €300,000 in planning costs. File photograph: Alan Betson/The Irish Times

An attempt to block the development of an urban beach on Dún Laoghaire’s East Pier on cost and planning grounds has been defeated at Dún Laoghaire-Rathdown County Council.

The urban beach - modelled on Berlin’s Badeschiff project - envisages a cafe and an artificial beach at Dún Laoghaire’s East Pier, alongside a floating river barge containing a swimming pool with heated, treated seawater.

The council has twice before voted to go ahead with the project, estimated to cost €2.5million to construct, including about €300,000 in planning costs. The total costs are to be divided between the council and the Dún Laoghaire Harbour Company which is responsible for harbour development.

However, People Before Profit councillor Melisa Halpin told the council she was opposed to the project on two levels.

She claimed the council had previously made it clear the urban beach was a replacement for the restoration of the former Dun Laoghaire baths. She also said there was a difficulty in getting the council to fund small things “such as a path through a field” out of its capital budget.

Along with fellow People Before Profit councillors Karl Gill and Hugh Lewis and independent councillor Victor Boyhan, she urged the members to vote against the payment of €150,000 as a contribution towards planning costs incurred by the Harbour Company since last July.

Cllr Michael Merrigan told the council there was a need to allay fears that the urban beach would scupper the rejuvenation of Dún Laoghaire baths.

A number of councillors noted the urban beach was currently subject to a planning appeal and they questioned whether it was appropriate or in the democratic interest to make financial contributions to the project in advance of a decision.

On a vote, councillors defeated the proposal to withhold funding by 16 votes to seven.