Sea soaked up vast heat but temperatures to rise from 2030, researchers say 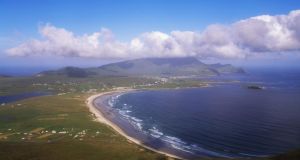 he Atlantic Ocean has masked global warming this century by soaking up vast amounts of heat from the atmosphere, scientists have said. Photograph: Getty

The Atlantic Ocean has masked global warming this century by soaking up vast amounts of heat from the atmosphere in a shift likely to reverse from around 2030 and spur fast temperature rises, scientists have said.

The theory is the latest explanation for a slowdown in the pace of warming at the Earth’s surface since about 1998 that has puzzled experts because it conflicts with rising greenhouse gas emissions, especially from emerging economies led by China.

“We’re pointing to the Atlantic as the driver of the hiatus,” Professor Ka-Kit Tung, of the University of Washington in Seattle and a co-author of today’s study in the journal Science has said.

The study said an Atlantic current carrying water north from the tropics sped up this century and sucked more warm surface waters down to 1,500 metres (5,000 feet), part of a natural shift for the ocean that typically lasts about three decades.

It said a return to a warmer period, releasing more heat stored in the ocean, was likely to start around 2030. When it does, “another episode of accelerated global warming should ensue”, the authors wrote.

Almost 200 governments aim to agree a deal to combat climate change at a summit in Paris in late 2015 and the hiatus has heartened sceptics who doubt there is an urgent need for a trillion-dollar shift from fossil fuels to renewable energies.

Several previous studies have suggested that the larger Pacific Ocean is the likely site of the “missing heat” from man-made greenhouse gases, perhaps linked to a series of La Nina cooling events in the Pacific in recent years.

Other suggestions for the slowdown in warming have included a rise in industrial pollution that is blocking sunlight.

A separate team of scientists writing in the journal Nature Geoscience on Sunday said that factors including swings in the sun’s output and sun-blocking dust from volcanic eruptions may account for gaps in understanding the warming trends.

In addition, La Nina cooling events in the Pacific Ocean had played a role, according to the report that examined why computer models of the climate had over-estimated temperature rises in the past decade.

But no one knows for sure.

“It will be interesting to see how and if these ideas are connected” with the theory of the Atlantic, lead author Markus Huber said of the study by the Institute for Atmospheric and Climate Science at ETH Zurich.

Today’s study said a shift in salinity may have caused more heat to be transferred to the depths of the Atlantic.

Warm, salty water from the tropics flows north on the Gulf Stream in the Atlantic and sinks when it meets cooler water. The “great ocean conveyor belt” then makes cold water flow in the depths to the Southern Ocean.

Even though global warming has slowed, 13 of the 14 warmest years on record have been this century, according to UN estimates.

A UN panel says it is at least 95 percent certain that human emissions, rather than natural variations in the climate, are the main cause of rising temperatures since 1960 that have caused more heatwaves, downpours and rising sea levels.

1 Coronavirus: Surge in cases still expected to hit hospitals in coming days and weeks
2 ‘Everyone still thinks it’s a joke’ - parents of toddler with coronavirus speak out
3 Coronavirus: Trump’s tone changes as US faces brutal loss of life
4 ‘Putin is crazy’: Russian leader lambasted over US coronavirus aid
5 Coronavirus: Westmeath has highest rate of Covid-19 outside of Dublin
Real news has value SUBSCRIBE

‘We are with you, in thought and in spirit’ - President broadcasts message on Covid-19 13:13
Timmy Dooley faces uphill struggle as Seanad election count resumes 13:09
Teenager brought into special care amid concern she was being sexually exploited 13:07
Cork men quarantined in Vietnam after St Patrick’s Day party 12:55
Coronavirus: Surge in cases still expected to hit hospitals in coming days and weeks 12:25