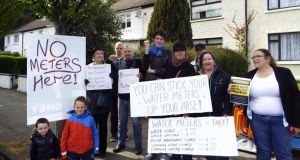 A group in Raheny, Dublin, protesting against Irish Water service charges this afternoon. Photograph: Dublin Says No campaign via Facebook 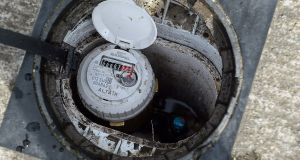 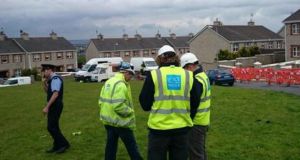 Gardaí and Irish Water contractors at the Ashbrook Estate in Togher, Cork where residents and protesters are protesting against the installation of water meters. Photograph: Alan Healy Evening Echo via Twitter

Anti-water service charge protests have spread to Dublin as residents of a Cork housing estate continue to prevent Irish Water contractors from installing water meters in their estate.

In Dublin a group of people were this afternoon protesting against water metering in an estate in Raheny. However, a spokesman for Irish Water said the demonstration did not disrupt the installation of water meters.

About six members of the Ballyhphehane and South Parish Anti-Water and Property Tax group continued with their blockade of the Ashbrook Heights estate in Lehanahgmore in Togher on Cork’s southside this morning.

The group, who yesterday prevented contractors from Irish Water installing meters at the 65 houses in the estate, were warned by gardaí that they could face arrest if continued with their blockade of the estate.

Group spokesman, John Lonergan said that the campaign group had been contacted by residents in the estate who sought their support against the introduction of smart water meters and they were determined to stand with the residents.

“We’ve been asked by the people in this estate to come here last Monday, April 14th that Irish Water were installing water meters and the people didn’t want them so we came up here and we stood with them last Monday morning and we stayed here for the week.

“The contractors never arrived and then I got a phone call yesterday morning at half past seven saying they had arrived with no prior notice to the people inside that their water was being turned off or their lives were being disrupted.

“So a few of us came up and we stopped the work – they had dug some holes and we send people to stand in the holes so they couldn’t install the smart meters and we’re here again and we’ll stay here as long as it takes – people here do not want these smart water meters.”

Mr Lonegan said that gardaí who visited the scene this morning told them that they could not stop people from entering the estate and if they did so, they would be arrested but he said they were going to continue supporting the residents in their opposition to the meters.

“Irish Water have already faced this type of opposition all around the country but there’s been no media coverage – we’re not doing it for the media- we want an answer from Irish Water why they are installing smart water meter when people don’t want them.”

“People don’t want these smart meters installed for the simple reason that if they can’t afford to pay their water bill, Irish Water will be able to somebody out with a laptop, check their bill and he will be able to reduce their water and it’s totally wrong.”

Local Ashbrook Heights resident and mother of two, Suzanne O’Flynn said that she fully supported the protest and she was particularly concerned about the health issues associated with smart meters and possible radiation emanating from the devices.

“The health issue is what I’m most worried about – okay if we have to pay something, why can’t they give a flat rate to every household and be fair about it but my concerns if the people of Cork or Ireland can’t afford, we’re going to be reduced down to five litres a day.

“I don’t want a smart meter in because of the radiation – we weren’t notified about any health issues with it – if they had any cop-on in Irish Water they would have come around to all the residents and re-assured us on everything and maybe we wouldn’t be in this predicament.”

Irish Water contractors did install five water metres in Ashbrook Heights on Monday have not attempted to enter or engage with the protesters as they said that safety of both contractors, residents and protesters was paramount.

“Irish Water recognises the right to protest and endeavours to facilitate this right insofar as is reasonably possible while maintaining the safety of the staff, the public, and the site of work,” a statement said.

“The Irish Water metering programme is a national programme, set out in the Programme for Government and to date, Irish Water has installed over 200,000 water meters nationally and despite the protests, Irish Water contractors are installing around 27,000 meters a month.”