Another Life: Waiting for the woodpeckers

A bird that was once widespread in Ireland is returning 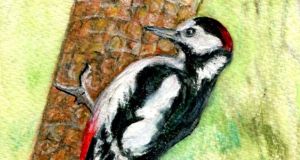 The hawthorn outside my workroom window tries hard to be a tree. But generations of gales from the sea have stunted and tangled it, so that most of the twigs are bare, dark scribbles, knotted this way and that.

Birds, however, are drawn to it delightfully, not least for the peanut feeder swinging in the wind. I keep an eye on it, watching for oddities. A circus troupe of goldfinches has been mobbing it for days, but now a coal tit has just sneaked in for a share, and I’m glad to see greenfinches back.

A real surprise, however, was a small bird the other morning, ignoring the nuts but inching up the tree’s gnarled bark, rather like a mouse, to search its mossy crevices for spiders. Only for the flash of its white underparts I might have missed it altogether, for the treecreeper’s brown back is beautifully cryptic (as naturalists say) to mingle with lichens and weathered wood.

Despite its Latin name, Certhia familiaris, the treecreeper’s camouflage guarantees its general unfamiliarity. I remember the thrill of my first one, on a tree in the Boyne Valley, when trying out my first pair of birdwatching binoculars. For this bird to appear now – blown in, it must be, from some distant hedge or spinney – seems to authenticate the wild abandon of our acre.

How many trees does one need to interest a great spotted woodpecker? I have been wondering this since trusted residents of Achill began reporting the odd woodpecker or two at that notably bare-backed outpost of Mayo. But then, just as I write this, comes a reader’s news of a bird drilling away at an upper branch of an ivy-smothered tree on a moorland path near Clifden, in Co Galway.

The woodpecker took its time in returning to Ireland. It was once widespread here, as evidenced by ancient bones found in caves in Co Clare. Like the capercaillie and goshawk, it may finally have disappeared with the last big clearances of trees in the 17th and 18th centuries.

The occasional sighting afterwards, in winter, continued to raise hopes that, as our tree cover was renewed, there might be recolonisation from Wales. Numbers of this normally highly sedentary bird quadrupled there through the close of the 20th century.

The Irish Wildlife Trust planned a trial reintroduction of the woodpecker, seeing it as a potential keystone species. Its old nest holes often lead to the fungal decay of tree heartwood, creating hollows for bats, squirrels and insects. But the plan was overtaken by events. From 2005 sightings in Ireland’s eastern woods, from Antrim to Wicklow, began suddenly to increase.

Reports of juvenile birds, courtship flight displays and drumming by male birds all pointed to breeding, and in 2006 the first nest hole, with young birds nearby, was found in Northern Ireland. Then young birds began turning up at garden nut feeders in Dublin and Wicklow, and, soon after, the first old nesting holes were found, high on the trunks of oaks and Scots pines in the Wicklow woods.

The woodpecker bores a new nest hole each spring, usually in decaying wood, and although the young birds disperse in autumn, often discovering garden nuts, the adults stick around in their territory during winter.

BirdWatch Ireland, which found the first Wicklow nest holes, suggests watching for woodpeckers in the woodlands around the Glendalough lakes and Tomnafinogue Wood, in south Co Wicklow (no song, but high bouncing flight, a loud and agitated “kick” sound if you worry them).

A look at the species distribution map at biodiversityireland.iefinds Dendrocopus major – the great spotted woodpecker – now well established in the woodlands of the east coast, with outlying sightings in the midlands and north and in Clare and Kerry.

We owe the woodpecker’s return to a population explosion, fortuitous easterly winds and welcoming habitat. (The magpie, after all, wasn’t blown into the southeast until the late 17th century.)

But what changes in birdlife may we expect from the effects of climate change? For some birdwatchers the chance of new species moving north to Ireland might be exciting, but the loss or extinction of many others seems as likely.

In the UK a detailed report was published last November by the Royal Society for the Protection of Birds. The nature of climate change is generally apprehensive, as global warming disrupts ecosystems faster than their species can shift or adapt. Already, it says, population trends are changing for more than 400 European species of bird.

So although it might be nice to contemplate new southern warblers and nuthatches moving north to breed, Ireland may well lose some of our native birds.

The red grouse will have retreated, perhaps to northern Scotland, and the curlew, already scarce as an Irish breeding bird, seems doomed to further decline. Even the familiar meadow pipit, another northern species, may come to find Ireland intolerably warm.