Another Life: The case of the kneecapped bear

A bone found in Alice and Gwendoline Cave, in Co Clare, revealed that humans arrived in Ireland 12,000 years ago, a whole 2,500 years earlier than hitherto believed 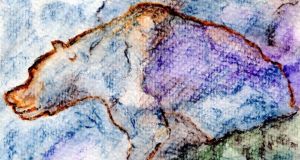 It was Oscar Wilde’s father, William, a Dublin surgeon-naturalist, who decided in the 1860s that it was time some order was put on the thousands of bones “stored away among the lumber of the crypts” beneath the Royal Irish Academy, in Dublin. He was prompted by the latest haul of woolly-mammoth bones from a cave at Shandon, Co Waterford, mixed up with the bones of brown bears.

Around 1900, huge numbers of bear bones were among some 70,000 excavated from limestone caves in Co Clare. “Cave work of this kind is an exact science,” Robert Lloyd Praeger wrote hopefully.

It was anything but. Excavation was painstaking, digging and sifting by lantern light, but torrents of glacial water, sweeping through the limestone galleries, had jumbled ancient bones together, defeating attempts at stratifying them.

In 1903, however, a bear bone that was to change Ireland’s human history was retrieved among thousands of others from Alice and Gwendoline Cave (charmingly named for ladies of the nearby manor), near Ennis. Early scrutiny of the patella, or kneecap, of the shaggy Ursus arctos found seven cut marks that could have been made by a Stone Age butcher with a long blade of flint.

Their huge significance, announced last month, had to wait on a routine reanalysis of some of the museum’s bones by an animal osteologist, Dr Ruth Carden. Intrigued by the knife cuts, she teamed up with Dr Marion Dowd, a specialist in cave archaeology at Sligo Institute of Technology, to seek funding for radiocarbon dating of the bone at Queen’s University Belfast.

The result was revelatory for human arrival in Ireland – 12,000 years ago, a whole 2,500 years earlier than hitherto believed. A second bone sample was sent for testing at the University of Oxford; it came back with the same date. The gashed bone was then sent to three university specialists in the UK and Hungary.

They were agreed that the cuts were made into fresh bone, so the butcher matched the date of the bear. This pushed back Ireland’s first human hunters from the Mesolithic into the Paleolithic and the final ebb and flow of the Ice Age.

The discovery had profound importance for Prof Peter Woodman, long Ireland’s leading authority on the island’s archaeological record. He has spent a lifetime seeking to document man’s earliest arrival. His 1970s discovery of a Mesolithic settlement on a high ridge overlooking the River Bann in Co Derry put the date at 9,000 years ago. But he always accepted that “Mount Sandel is not the earliest human settlement in Ireland, it is the earliest known site in Ireland and there may be something marginally earlier”.

On an island so changed by ice, only the jumbled bones of the caves remained as clues to the animals surviving the last throes of cold and into the earliest years of human settlement. The question of just when they existed had to wait for today’s refinements of radiocarbon dating.

Analysis of ancient DNA suggests that many of of Ireland’s “native” mammals were early importations, notably from Iberia, so that “Which came first – people or animals?” question has remained up for discussion.

If, as suggested, the wild boar was brought in as quarry, a pair of suitably trussed-up bears might conceivably have arrived in Iberian currachs.

Woodman prefers to believe in the possibility of a continuous population of bears through from the Ice Age and into the age of man.

It could also be, however, that at the peak of the Ice Age brown bears were denied their last refuges on the glaciated island and roamed out across the ice or exposed seabed.

Did they there mingle and mate with the polar bear, Ursus maritimus? American-led genetic research concludes that the female ancestor of all living polar bears was a brown bear living in Ireland some time between 20,000 and 50,000 years ago. (It appeared in Current Biology in 2011: “Ancient hybridization and an Irish origin for the modern polar bear matriline”, by CJ Edwards et al.)

The record now picks up again at 12,000 years ago, with the kneecapped bear in the Alice and Gwendoline Cave. It would be wholly fanciful to wonder which colour it was, and my drawing borrows not from Clare but a cave full of ancient bear bones at Chauvet, in France, sealed off by a landslide 30,000 years ago.