About 60% registered with Irish Water as deadline approaches 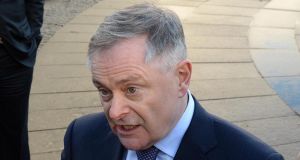 About 60 per cent of the total number of homes expected to pay bills have registered with Irish Water with under two weeks until the deadline.

Irish Water’s head of asset management Jerry Grant said just under 800,000 had registered with the utility company to date.

Mr Grant said a further 200,000 homes had responded which were not Irish Water customers because they were part of a group scheme or used their own septic tank.

Last October, Irish Water said about 747,000 householders had “responded” to the packages it had sent out. Asked in October if this represented the numbers signed up for the charges, Irish Water said the majority had “validated” their accounts.

Following the latest report from Environmental Protection Agency (EPA) on the problems with Ireland’s water quality, Mr Grant also said Irish Water needed at least €2.3 billion to fix the problem in the country’s infrastructure in the next six years.

“For water supply alone we believe we need €2.3 billion to invest between now and 2021. The Government has decided that for that level of investment we need to be able to borrow that money as Irish Water off balance sheet,” Mr Grant told Sean O’Rourke on RTÉ Radio 1.

“For that purpose we have been set up to levy a charge on our customers and collect the majority of our revenue from our customers directly in order to meet the market corporation test and be a entity that can borrow money.”

“It’s not just about investment although investment is a very big part of it. It’s also about the operational regime.”

The EPA report highlighted 121 vulnerable drinking water supplies across the State. Mr Grant said the goal was to get the number under 100 by the end of this year.

The agency’s report also said more than 20,000 people using 20 public water supplies remained affected by boil water notices and some of them have been affected for a number of years.

Mr Grant said it was “really important” for Irish Water to get the maximum amount of people registered by the closing date of February 2nd. “What this is about is sending the right bill to our customers,” he said.

Mr Grant said if people did not register, the bill would be sent to the occupier of the residence of €260. He said for people who did not pay, the first step Irish Water would take would be to contact people and find out why. “We will work with people... we want people to pay,” he said.

Mr Grant said the details of the conservation grant of €100 would be given through the Department of Social Protection and was for all water users.

Minister for Public Expenditure Brendan Howlin told reporters before a Cabinet meeting on Tuesday morning, the problems highlighted by the EPA were the “whole reason” Irish Water was set up.

“Of course they (Irish Water) have to ratchet up the volume of money they spend,” he said.

“Rather than have Irish Water, as they have done in the past, compete with health and education for scarce capital resources, they’ll now be able to raise their own money and ratchet that up to deal with the real problems that exist.”

Mr Howlin said Ireland had been threatened with legal action from the European Commission because of pollution in the country’s water and rivers.

“That’s why we wanted one integrated agency to have a national focus on providing decent quality water wherever you live,” he said.

The first bills from Irish Water will be sent out in early April.