About 1,200 drones listed since registration made mandatory

Potential application for drones ‘truly incredible’ according to Paschal Donohoe 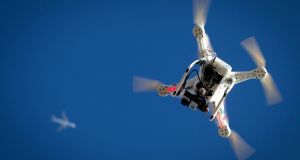 There are now 1,200 registered drones in Ireland, the Department of Transport has confirmed.

Since December 21st, drone registration has been mandatory in accordance with the Small Unmanned Aircraft (Drones) and Rockets Order (statutory instrument) S.I. 563 of 2015.

The regulation makes Ireland one of the first countries in Europe to make drone registration compulsory.

All drones over 1kg must be registered with the Irish Aviation Authority (IAA).

Speaking at the launch of National Drone Registration Day at an event in the Phoenix Park, Dublin, Minister for Transport Paschal Donohoe said the potential application for drones “is truly incredible - and the development of the drone industry in Ireland will have a very positive effect on the wider community”.

IAA director of safety regulations Ralph James encouraged drone users to familiarise themselves with the regulations surrounding their use.

Registration can be completed online via the IAA’s website, iaa.ie/drones.

To encourage early registration, drone registration is free until the end of January. After this a nominal fee of €5 will apply.