Opinion: There is encouraging evidence of an appetite for new ideas at the highest level 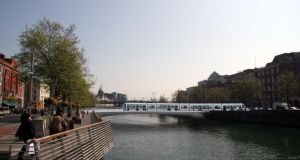 Joined-up thinking: a photomontage by engineers Roughan O’Donovan of the new Liffey bridge, the Rosie Hackett, seen from O’Connell Bridge, with a tram passing over, part of a new project which will link the Luas Green and Red lines.

What do we talk about when we talk about design? Discussion of it is often confined to the lifestyle sections of our newspapers: attractive furniture and pleasantly uncluttered living spaces speak to certain aspirations as to how we might live our lives.

But design is about more than aesthetics and gloss and has a critical role to play in delivering innovation, economic growth and value for money. It can also deliver a fairer and more engaged society.

Design has been the Cinderella of the policymaking process in Ireland for too long.

This was not always the case. We started strongly by establishing the world’s first government-sponsored design agency, Kilkenny Design Workshops, in 1963. However, following financial difficulties State support was withdrawn from Kilkenny and in 1988 it shut.

In May 1999 the Opportunities in Design document published by Enterprise Ireland recommended the development of a national policy for Irish design supported by an interdisciplinary representational and advisory design body. However, these recommendations have since gathered dust. At a European level, however, change is afoot. The Europe 2020 Innovation Union initiative, whose motto is “More Jobs, Improved Lives, Better Society”, is firmly focused on the potential of a design-led approach to development and in particular design’s capacity to deliver “user-centred innovation”.

What this rather dry term means is that design starts from the user’s perspective and that new products, services and systems that address our needs are more effective, useful, long-lasting, delightful and, yes, profitable.

In an EU policy document published at the end of September, we are reminded that: “Although some European countries are world leaders in design, others lack a robust design infrastructure and design capability.”

While Ireland is not mentioned by name it is clear that we do indeed lack a “robust design infrastructure”.

Design champion
Capability, however, is a matter we can be optimistic about. There is great capacity and talent among Irish designers across all disciplines. Yet there is no overarching champion for Irish design. The lack of a design strategy and of an implementation body hampers our ability to harness this design resource effectively.

It also makes it difficult to communicate the role design can play in delivering the systems, services and products that determine how well we make and manage our lives.

Put simply, cities that value and apply design in how they think, plan and act are more humane, more attractive and more competitive cities. What would Dublin be like if we adopted a design-led approach to decision-making and place-making?

Certainly we would make fewer costly mistakes. The Luas lines would have joined up the first time around. Ballymun, a neighbourhood of 20,000 people, would not have needed to be demolished and rebuilt 30 years after being built.

We would have city streets that work for people first and cars second. We would have more urban greening. We would have designed a system to manage apartment buildings before we built so many apartments. We would have a city centre governed by one, not three, administrative areas. We would be better at engaging with citizens, we would seek people’s input at the very start of a process.

On a positive note, Dublin City Council is making great advances in integrating design thinking into decision-making and in putting people first. Projects such as the Parnell Square Cultural Quarter are being designed as physical connector projects for the city – in addition to being great places and works of architecture.

The Dublin House project invites people to design their own apartments in small-scale developments and in the process transform how people think about living long-term with their families in the heart of Dublin.

Collaboration platform
PIVOT Dublin, the design promotion project initiated in 2009 by Dublin City Council, provides an open platform for collaborative projects that explain, demonstrate and celebrate design’s positive impact on social, cultural and economic life. The project was born out of Dublin’s bid to be designated World Design Capital in 2014.

Tomorrow, PIVOT Dublin is hosting a discussion on whether design can offer a framework to reactivate our economy, deliver more cost-effective public services and rethink how we govern the city.

We’ll be hearing from international experts who are design leaders in countries which invest in design. There are some indications that the Government is starting to listen – that Government secretary general John Moran has agreed to join the panel discussion says much about the appetite for change and new ideas at the highest level.

But we need reform sooner rather than later. We need a national design strategy. We need to ensure design is an integrated element of the Government’s Action Plan for Jobs. We need to harness the disparate energies and talents in the design sector in a way that can deliver real and lasting transformation.

Ali Grehan is Dublin City Architect and founder of PIVOT. There will be an event, Designing Growth, hosted by the organisation tomorrow evening at the Lighthouse Cinema in Smithfield, Dublin. Contact design@dublincity.ie