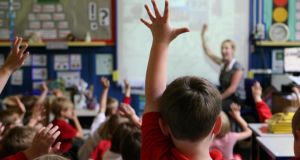 Half of primary schools requested a “voluntary” contribution from parents, and the amount sought has risen considerably this year. Photograph: Dave Thompson/PA Wire

Parents’ associations are now paying the monthly heating bills at a number of primary schools due to a shortfall in funding, principals have claimed.

Publishing the results of a survey of 500 primary schools carried out last week, the Irish Primary Principals’ Network (IPPN) said that over 85 per cent of respondents said that they were worse off financially compared to this time last year.

Half of schools requested a “voluntary” contribution from parents, and the amount sought has risen considerably this year.

Of those schools seeking such contributions, 24 per cent asked for more than €100. This compared to 14 per cent in the network’s last survey in January 2012.

The group said such contributions, along with emergency fundraising and once-off loans from parishes, were being used to pay utility bills and insurance premiums. “A number of schools reported that parent associations are paying the heating bills.”

Capitation grants have been cut from just over €200 per pupil in 2010 to €173 in 2014 through successive budgets, and access to the minor works grant has been curtailed.

IPPN president Brendan McCabe pointed out that Department of Education officials had acknowledged in a memo last summer that schools were near financial breaking point. “It is extremely disappointing that the Department of Finance and Public Expenditure failed to act on its recommendations.”

The network’s chief executive Seán Cottrell described voluntary contributions as “nothing other than a further form of taxation”.

He said: “It is a disgrace that parents, having earned salary and paid taxes, are then depended upon to subsidise the running costs of their local primary school.”

Meanwhile, Education and Training Boards Ireland (ETBI), which represents vocational and community secondary schools, has backed Minister for Education Jan O’Sullivan in her battle with the teacher unions over junior cycle reforms.

ETBI general secretary Michael Moriarty said it “exhorts the unions to give careful consideration to these compromise proposals from the Minister, which we consider both fair and workable”.

“We respectfully request that the unions now re-engage with the department and give their full support to implementing the much-needed reform of the Junior Cycle, which we feel now more considerably respects the concerns of the teachers, and is clearly in the best interests of the students.”

ETBI has also published the results of a survey showing heightened concern over cuts in middle-management in schools.

Speaking at a meeting of its principals and deputy principals in Limerick, research officer Pat O’Mahony called for the urgent establishment of a national forum on school management to develop new leadership structures.