Up to 10,000 expected for festival of flags in Dun Laoghaire

Some 60 countries to participate in parade 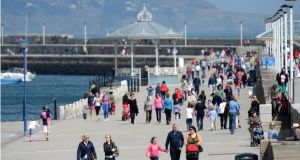 Dún Laoghaire pier: festival will include exhibitions, a genealogy village, traditional music, embassy celebrations, a concert and a parade.

Several thousand visitors are expected in Dún Laoghaire this week for an international festival of flags.

The Bratacha Festival, opening tonight and running until Saturday night, is billed as a celebration of flags, logos and emblems. Participants are travelling from more than 60 countries including Mongolia, South Africa, Israel, Tanzania and Canada as well as from every EU member state.

The festival will include exhibitions, a genealogy village, traditional music, embassy celebrations, a concert and a parade.

The parade, on Saturday beginning at 3pm, will feature hundreds of flags from participating countries as well as from sports clubs, societies and organisations along with marching bands, floats and antique cars. The parade will begin at the People’s Park and travel through the town to the seafront.

Other festival highlights will include the official opening at 4pm today in Cabinteely Park. Tánaiste Eamon Gilmore is to raise a flag designed for the festival and a new garden entitled “Europe in Bloom” with herbaceous beds representing each member state of the EU will be unveiled.