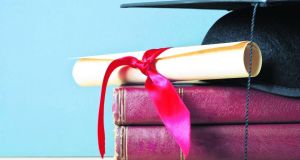 Phil Baty, rankings editor at Times Higher Education, said: “This is a real shock result for Ireland – not only has TCD fallen further away from the world top 100 list, but UCD has plummeted out of the top 200 altogether.” Photograph: ThinkStock

UCD has fallen out of the world’s top 200 universities in a prestigious global league table, just three years after it dropped out of the top 100.

The sharp decline in the university’s performance has led to renewed calls for a reversal of cuts to higher education.

Tom Boland, chief executive of the Higher Education Authority said: “There should be no doubt that we are now at a tipping point. The global university rankings, for all their flaws, reflect international perceptions and we should take note of concerns that our universities are not in a position to compete.”

TCD also fell in the latest ratings from Times Higher Education (THE), a British publishing firm, slipping from 129th to 138th place.

In 2010, TCD was ranked as high as 76th and the previous year, in a joint survey between THE and another rankings company QS, it was 43rd in the world.

There was better news for NUI Galway. It leapfrogged UCC into third place among Irish universities (rising from 301st-350th to 251st-275th). UCC remained unchanged in the 276th-300th bracket, while the Royal College of Surgeons in Ireland entered the top 400 at 351st-400th.

The three other universities in the Republic remain outside the top 400, as does the University of Ulster. Queen’s University Belfast remained unchanged in the 251st-275th bracket.

UCD president Prof Andrew Deeks described the results as “very puzzling, coming only two weeks after the release of the QS ranking, which, based on objective measures, showed us holding our place at 139.

“Our own analyses show that in terms of objective measures of teaching and research performance, we are performing well and making good progress.”

Trinity’s Dean of Research, Prof Vinny Cahill said: “Our universities are sliding because we can’t compete on funding. On a per academic basis, Trinity’s annual budget is 45 per cent lower than that of the average top 200 university.”