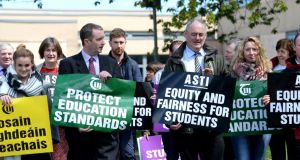 The executive committee of one of the two unions representing secondary school teachers has recommended acceptance of revised plans to reform the junior cycle.

The leadership body of the Teachers’ Union of Ireland (TUI) said the compromise plan negotiated with Minister for Education Jan O’Sullivan had met the concerns of teachers who took part in strike action over her predecessor Ruairí Quinn’s proposals.

The central executive committee of the Association of Secondary Teachers Ireland (ASTI) is meeting on Saturday to decide whether to recommend acceptance to its members.

Both unions are planning ballots around the same time next month, with the TUI ballot papers being posted out on September 9th, with a closing date for returns of September 23rd.

A joint decision from the unions is expected to be announced on September 24th.

The ballot takes place ahead of a separate vote within the unions on the Lansdowne Road “pay restoration” agreement.

The main executive bodies of both the ASTI and the TUI have already recommended rejection of this deal.

On the junior cycle plan, TUI president Gerry Quinn said: “The executive committee of the TUI has comprehensively analysed the proposals and consider that they meet and allay the deep concerns expressed by teachers, both in terms of assessment of students and the time and resources required by teachers and schools to implement the proposed new junior cycle programme.

“Crucially, the proposals secure and enhance the externally assessed Junior Certificate, ” he said.

“Significant concerns about additional bureaucracy have been adequately addressed.

“Responsibility for the administration and assessment of the Junior Certificate will remain with the State Examinations Commission and will not be foisted on schools.

“Our principled and consistent position has always been that elements of previous proposals posed grave threats to the quality of the Irish education system and its service to students.

“We believe that the latest negotiated proposals will enhance second-level education while protecting the working conditions of teachers. The proposals outline a progressive and positive way forward.

“A highly significant element of the document which we are voting on is the inclusion of an implementation committee, comprised of representatives of the department and the trade unions.

“This committee will monitor implementation of the proposals and ensure that any issues which may arise are appropriately addressed,” said Mr Quinn.

There are some tensions within the ASTI ahead of Saturday’s meeting, with executive members aligned to the ASTI Fightback faction pledging to campaign against the junior cycle reforms irrespective of the union’s official stance.