The war on rote learning just doesn’t add up

Opinion: Can you teach skills without facts? For students to apply their skills to knowledge outside their experience, we have to teach that knowledge and encourage problem-solving ability based on facts 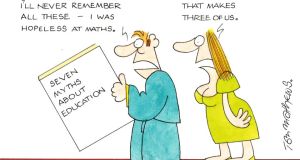 That memory is vital for learning is fundamental. Long-term memory is a central and dominant feature of cognition, and all aspects of seeing, hearing, thinking and understanding is ultimately dependent on, and influenced by, our memory. Critical thinking processes such as reasoning and problem-solving are intimately dependent on factual knowledge stored in long-term memory.

And yet many modern education systems, prominent educationalists and even government agencies fail to recognise this and give advice contrary to the basic facts of memory retention. Some advocates of “21st-century skills” speak disparagingly of knowledge and want to marginalise its place in the curriculum. There are some facts you simply have to learn before you can progress any further.

Facts enable understanding and are not opposed to understanding. Our long-term memories can store a great deal of information, but our working memories are limited. What we’ve committed to memory helps us to solve problems.

Recent studies suggest that people often use the wrong strategies for learning and don’t appreciate ones that work. For example, studies show that retrieval practice and testing is a much more powerful learning strategy than repeated review and re- reading, and also practice is much more effective when it’s broken into periods that are spaced out.

The recent book Make it Stick by Peter C Brown, Henry L Roediger III and Mark A McDaniel makes some interesting observations on these matters of facts and learning.

It’s a fact: when learning is harder it lasts longer. “If we don’t teach powerful knowledge in schools, we end up with social inequality, because richer pupils will gain that knowledge from their parents and private tutors, whilst poorer children will not.’’

Mathematics is not just about arithmetic; modern maths underpins science, including computer science and engineering, and its concepts pervade finance, business and many other areas. Besides the usefulness of the subject, the excellence of the rigour and logic that goes into learning mathematics has long been recognised as fundamental. Strong performance in maths at all levels is of vital importance to our future and economy.

Can we “discover” or “learn” the basics of a subject that has taken thousands of years to develop by “project” and “discovery” methods? There are some mathematical facts you simply have to learn before you can progress any further.

The project mathematics now being implemented at second level means that some of the basic knowledge requirements necessary for international-standard third-level programmes have been omitted.

Our reputation is at stake, and our progress towards a knowledge economy has taken a backward step.

The state of maths here is vitally important in more ways than the educational.

Mathematical and other puzzles, such as sudoku, crosswords and card games can keep the mind active and engaged for years, but they all require some basic facts and logical foundations before engagement.

The excuse or reason that “I am useless at mathematics’’ is essentially a mind laziness and can be the result of a bad introduction to the subject. It should not be tolerated; we all have the “maths gene”, unless there is some physical damage to a certain part of the brain.

A recent report on primary education noted our literacy and numeracy scores had increased for the first time since 1980; with some justification the claim was made that one of the major factors in all this was due to the near elimination of non-qualified teachers from primary schools. But the problem of non-qualified teachers of mathematics at second level persists and is getting worse.

The situation for maths at second level here is unique, in that so much of of the subject is taught by people who do not have basic mathematical qualifications (by all international standards that would be at least a degree or joint degree in maths).

Ignoring this problem, and the obvious solution, the powers that be instead decided the problem was in the syllabus, and by changing this all would be resolved. How wrong can they be?

If we want students to be able to apply their skills to knowledge outside their own experience, we have to teach that knowledge and encourage problem-solving ability based on facts.

Many well-meaning people and educational bodies suggest the use of Google and Wikipedia means we no longer have to memorise things.

This is a myth that is heard in everyday conversations. These are great resources, but to use reference tools such as Google and Wikipedia effectively, you need to start with a great deal of knowledge.

Richard Hamlet, a renowned software engineer who has written numerous textbooks, surveys, research papers and encyclopedia entries on software, recalls an experiment where computer science students were required to research on various aspects of software and then write up their findings. Almost all took the first or second entry of their Google search; these in many cases were incomplete, sometimes inaccurate and often misunderstood.

There are numerous examples of the misuse of language resources online: “Deirdre stimulated the soup” for “Deirdre stirred the soup”; and “Our family erodes a lot” (that is, they eat out) being just two.

Interestingly, Google’s search engine is itself a mathematical concept, which consists of a huge matrix empowered with certain mathematical properties. The name of the company Google derives from the word “Googol”, which mathematically means 10 to the power of 100 (which is one followed by 100 zeros).

It is estimated that Google has more than 1.2 trillion or 1.2x10 to the power of 12 worldwide hits a year; this is a huge number itself, but it would then take about 10 to the power of 88 years to get a Googol of hits.

A matrix is an array of data arranged in rows and columns, but now it would be impossible to explain even the basic idea of the “Google matrix” to our Leaving Cert students; the idea of a matrix is not part of the new Project Maths syllabus.

Many types of communications depend ultimately on the safe and secure transmission of data represented by large “numbers”. For example CDs, DVDs, high-definition TV and digital cinema owe their success to a large extent on “error-correcting” codes, which require manipulation in different large number bases.

Number bases used to be on the old syllabus. Can we afford to ignore facts?