The council wants to get teachers to buy in to continuing professional development and regulation. But how will it do that when it’s about as popular as Irish Water in some circles? 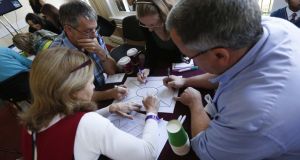 In many staffrooms, the Teaching Council is loved about as much as Irish Water. Each year teachers have to cough up €65 to stay on the register – or at least €90 to be registered in the first place – and the hard-pressed public servant might be forgiven for thinking it is a stealth tax.

What the individual teacher gets in return is rather vague, but there are tangible benefits for the profession in the long run. That’s how council director Tomás Ó Ruairc tells it anyway.

“The council is responsible for the storybook of teaching. What I mean by that is we are responsible for setting up the framework for the profession. The reason I use that metaphor is that we don’t ‘do’ the ‘doing’. The teachers do the teaching, and therefore it’s up to teachers to fill out the details of the book, of each of the chapters.”

The Carlow man and Gaeilgeoir speaks with an evangelical air, a product of his enthusiasm for teaching as well as the selling job the council still has to do.

A big test of its mettle will be the fitness-to-teach inquiries, due to start this year. The recently published Teaching Council Amendment Bill 2014 lists a range of grounds eligible for investigation, including professional misconduct, poor professional performance and risk of harm to a child or vulnerable person.

The council had recommended a system whereby a subcommittee would decide on a case-by-case basis whether hearings should be in private or public. Minister for Education Jan O’Sullivan has said she wants public hearings “by default”.

Whatever mechanism is finally worked out, Ó Ruairc is confident it will be “fair, robust and up to high standards”.

The fitness hearings are but one innovation in the council’s sights. Among its major achievements to date include setting up the register, the ongoing review of teaching training programmes, and piloting Droichead, a new model for formal induction of new teachers conducted by more experienced colleagues.

The council’s annual teaching showcase, Féilte, has quickly become a key event in the education calendar. At last October’s festival the council launched its consultation on continuing professional development (CPD).

Draft guidelines are due to be published in March 2016 with the aim of “supporting and developing an embedded culture of research in the profession”. Ó Ruairc quickly adds: “When I say that, I’m not saying every teacher will be expected to a have a master’s or a PhD, but every teacher will be expected to learn throughout their career and be informed by good research. So everything from engaging in a Twitter debate on #edchatie to doing a PhD would be acknowledged as valid learning for teachers.”

He emphasises this is what teachers have been calling for themselves. “They are looking for clear, simple summaries of what’s working and what’s not, to support their professional judgment.”

The same goes for the fitness hearings.

“Teachers want them to come into play. The greatest critic of an underperforming teacher is the teacher next door, because they’re the one picking up the pieces.”

Ó Ruairc himself started out as a history and Irish teacher at Athlone Community College but only spent nine months in the classroom before landing a job at Froebel College of Education. From there he moved to Foras na Gaeilge to head up its education wing, and then to the council.

The CPD consultation is partly about changing attitudes to training, sometimes dismissed as a “doss” or an optional extra. “An issue we have come across – and in fact it’s principals who have made me cop on to this – is that teachers’ learning is not valued to the same extent as other professions. There is a stereotypical view that if a teacher is not chained to the whiteboard or the blackboard they’re not doing their job, and that learning or CPD is nice but a luxury.”

The council is holding regional meetings as part of the consultation. Ó Ruairc says data from other professions shows about 1 per cent of practitioners will be involved in fitness hearings “but CPD will affect every single professional, so it’s important that we hear from as many of those professionals as possible before advancing it further”.

One idea under discussion is creating the post of “high teacher”, or “ard oide”, along the lines of the “chartered teacher” in Scotland, whose role it was to develop qualifications and skills that upped everyone’s game. Ó Ruairc noted, however, that Scotland has since phased out the scheme, and the council’s focus was less on “individual recognition” than creating a collaborative process involving all teachers.

Above all, he emphasises the need for flexibility in the council’s approach.

“There are 87,000 teachers in the system, one million pupils, 4,000 schools. They say content is king, but context is queen, it seems to me, and it’s important the framework wouldn’t be so rigid and prescriptive that every teacher must do X or Y.”

But is he encountering resistance from traditional quarters?

Notwithstanding some pilot leadership programmes, the practice of teachers critiquing the work of their peers remains rare.

“There is a challenge but I think that’s beginning to change. The fear that many teachers had about Droichead initially was that they didn’t want to see standards fall, and quite rightly. But I think when they realised it was not about that, it’s about a different interpretation of standards, they at least opened their minds up a bit more. Droichead shows there is no voice more impactful than the voice of a fellow professional.”

The council is also challenging complacency within teacher-training colleges. As part of its process of accrediting third-level courses, it has put the colleges “through the wringer quite a bit”, says Prof John Coolahan, who has chaired some of the assessment panels.

For the first time, student facilities, teaching methods and research output are independently assessed, and the amount of time trainees are expected to spend in the classroom is extended. An outcome is that the seven universities and Hibernia College have been accredited for just two years rather than five, as originally planned, “subject to a review in two years’ time that everything they said is happening”, says Coolahan.

“We are conscious there is a change in culture involved . . . The Teaching Council is looking for a 15:1 [student-staff] ratio, and we have said, ‘What are you going to do about that?’ You are going to need extra staffing and so on . . . and in one or two cases there was a bit of, shall we say, indigestion about this: ‘Well, now, who are ye?’

“And we said ‘We are the accreditation committee of the Teaching Council and your course won’t be accredited, and you can forget it if you’re not complying’.”

If teachers are feeling over-regulated then they’re not alone. In response to such claims, Ó Ruairc says: “The likes of the Teaching Council have to keep reminding ourselves that every document we produce lands on the desk of a principal, lands on the desk of a staffroom, and if you multiply that times the number of organisations in education alone, that’s a lot of documents.”

However, what the council is trying to do is “liberate teachers to do a good job”.

“It’s up to us, at every opportunity, to explain why all this is important and how it all joins together. If teachers out there can’t see the links between those things, I would say that’s a fair perception that we have to respond to.” THE COUNCIL’S MAKE-UP: A COMFORTABLE MAJORITY The make-up of the Teaching Council guarantees teachers and their unions have a comfortable majority – something that was seen as necessary for the profession’s buy-in. Of 37 seats on the council, 22 (60 per cent) are reserved for registered teachers; 16 of these are elected, and six nominated by the teacher unions. A further place is reserved on the council for ICTU. The remaining 14 places are divided between teacher-training and third-level representatives (four), school management reps (four), ministerial appointments (three), parents’ councils (three) and Ibec (one).

Among the elected members are former ASTI president Bernadine O’Sullivan; Dympna Mulkerrins of the INTO education committee; and primary teacher Micheál Ó Gríof,a who is chairman of the council.

The 2012 elections were a source of embarrassment for the council. Ballots had to be reissued under legal advice because of typographical errors. The council said it cost €67,978 to rerun the ballot.