Only 38 per cent of ASTI members opt to vote, rejecting plan by narrow margin 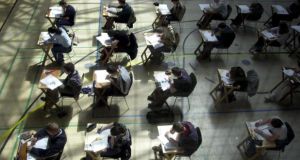 ASTI and TUI members were presented with two ballot papers one on whether to accept or reject the amended reform plan and the other to mandate further industrial action if the proposals are rejected. Photograph: Eric Luke

But the Teachers Union of Ireland, (TUI) which represents a third of teachers at second level, has voted to accept the reform plan.

The decision throws the Junior Cycle reforms in further disarray after 18 months of industrial action, including two strike days and a boycott of teacher training orchestrated by both unions.

With a turnout of just 38 per cent, the ASTI said it rejected proposals by 55 per cent to 45 per cent. The TUI accepted by a margin of 69 per cent to 31 per cent on a 60 per cent turnout.

The ASTI’s executive committee will meet on Friday to consider whether to escalate its industrial action, with members mandating such a move in a secondary ballot which took place alongside the main vote.

This ballot asked members whether it supported an escalation of the dispute, including further strike action, if the plan was rejected by the membership as a whole. Members voted 70 per cent to 30 per cent in favour of this.

ASTI general secretary Pat King said on Thursday he could not rule out further industrial action.

However, he said the union would also be looking to “engage further” with Minister for Education Jan O’Sullivan to clarify elements of the proposals for teachers. He stressed the issue was “not about money for teachers” but was about upholding educational standards.

Ms O’Sullivan said she was deeply disappointed by the ASTI result but pleased by the TUI outcome, and stressed that the reforms would go ahead.

“I am not very clear on what exactly their issues are; they were balloting in relation to very specific proposals on Junior Cycle reform, not on issues around trust but if there are issues around trust, I do want to absolutely assure them that we have resources set aside.”

Of the scope for further boycotts of training, she said: “I presume members of the TUI will participate [IN TRAINING]. I would certainly hope that ASTI would not block their members from participating.”

Acknowleding the risk of further delays and disruption, however, Michael Moriarty, general secretary of Education and Training Boards Ireland, which administers 275 second level schools, said it was a “devastating result” which would hurt students most.

“All the education partners have bent over backwards to accommodate the teacher unions. It’s seems to me now it’s the ASTI way or no way,” Mr Moriarty said.

The ASTI represents 18,000 second-level teachers, including 1,200 retired teachers who were entitled to vote in the main ballot. The TUI represents about 9,000 teachers at second level.

The TUI executive is planning to meet shortly to discuss the outcome, and it faces a dilemma given the two unions had to date been campaigning on a joint platform.

“Our principled position has been protected. The document explicitly acknowledges that significant change must be appropriately resourced from the start.”

The two unions are also balloting this month on the Lansdowne Road pay “restoration” agreement, having recommended to members to vote No to a deal which has already been accepted by the Irish Congress of Trade Unions (Ictu).

ASTI president Máire G Ní Chiarba said while the latest proposals addressed a number of significant issues, in an era of education cuts, diminished resources for students and increased teacher workload, teachers did not have faith in the Government.

Ms Ní Chiarba, who was part of negotiating team which agreed the draft plan, said ASTI members had also expressed concern about lack of clarity in the proposals. “Teachers needed far more clarity and detail about how the process will operate in reality,” she said in a statement.

Ms Ní Chiarba said “ASTI members are committed to educationally sound reform of the Junior Cycle. We have participated in a robust campaign including two days of strike action which led to significant advances in negotiations.

“The ASTI will now engage with its members in order to consider how best to pursue the outstanding concerns of teachers,” she said.