Unions say solution possible but only if school-based assessments scrapped 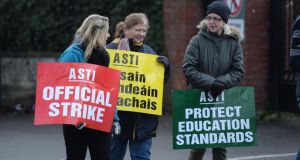 Teacher unions that held their second one-day strike over reform of the junior cycle yesterday say they believe the impasse can be broken if the Department of Education shows “a bit of imagination”.

Both sides in the dispute are to re-enter talks next week after more than 730 secondary schools were closed for a second time in as many months.

The Association of Secondary Teachers Ireland (ASTI) and the Teachers’ Union of Ireland (TUI), which together represent 27,000 post-primary teachers, say a solution is possible but only if the department scraps its plan for school-based assessment.

They have pointed to a proposal arising from the 2011 report of the National Council for Curriculum and Assessment for teachers to fill out detailed report cards, giving parents much more information about their children’s learning process.

ASTI president Philip Irwin said: “There is provision for a school report in the framework and that’s where I think we should all be looking for solutions.”

However, the department believes this falls far short of what is needed, arguing that meaningful reform requires teachers to take a greater role in assessment for State certification purposes.

“One education partner cannot be allowed to block this important reform. The voices of parents, students, school management and other partners are equally important in this debate.”

Ms O’Sullivan has herself attended four previous negotiation sessions with the unions, which officials on both sides admitted was unusual, and demonstrated a high level of engagement.

However, TUI president Gerry Quinn said school-based assessment needed to be taken off the table. “We are pro-reform and we will engage with reform but clearly we want to know it can be implemented.”

Asked where a resolution might be found, Mr Irwin said there was some room for manoeuvre in developing the “qualitative statements that teachers would always have made” by way of report cards.

“When you talk about group work or problem-solving, class sizes of 30 are very big for those kinds of approaches.”

He said in Finland teachers have much more time to develop such approaches “and these things cost money”.

Other stakeholders, including groups representing parents, students and employers, have expressed support for Ms O’Sullivan’s plan, while opinion is mixed among academics.

Dr Geraldine Mooney Simmie, a lecturer in education at University of Limerick, said the changes needed in the junior cycle to develop a culture of critical thinking and learning required “serious levels of investment” in schools and teacher education.

“If not done well this reform runs the risk of unintended consequences, such as, parents paying for study skills from fear that their child will lose out at the entrance to higher education.”