New figures indicate the state could save €3.5 million from school-based assessment 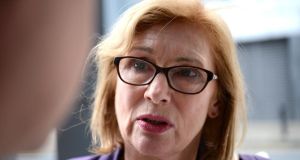 As their dispute with Minister for Education Jan O’Sullivan continues, new figures have emerged showing the State could save an estimated €3.5 million annually from the plan to have teachers assess their own students for 40 per cent of the planned Junior Cycle Student Award.

Of this amount, the costs associated with examining written and practical work presented by Junior Cert candidates is €8.7 million, and potentially only 60 per cent of this would have to be paid in future.

The strike by the ASTI and TUI yesterday closed more than 730 post-primary schools, affecting more than 330,000 students, along with their parents and guardians.

While the main reason cited by the unions for the dispute was a threat to the integrity of the current exams, there is also a concern among some teachers about loss of income and a general increase in workload.

TUI president Gerry Quinn said loss of income was “clearly very important” for the small minority of teachers involved in correcting papers “when you consider that 30 per cent of the teaching profession don’t have permanent jobs and or less than full hours”.

“But is that the driving force? No. . . There is no way you could have got 27,000 teachers out today in such determined fashion on behalf of a minority of teachers.”

The two unions say they are open to discussions with Ms O’Sullivan over reforms but insist that she first takes the plan for school-based assessment off the table.

However, the Minister says she has already made concessions and has called on the unions to discuss her plan under a third-party chairperson if necessary.

ASTI president Philip Irwin said teachers in the two unions were “shoulder to shoulder” in their opposition to the Minister’s plan.

Mr Quinn said the Minister’s proposal to have assessments subjected to external moderation was not sufficient to safeguard the integrity of the system. “What we are saying is: Don’t put the Irish education system through what would effectively be one huge experiment. Leave it where it would be tried and trusted, and where it works.”

Union officials have spoken informally about whether an assessment model similar to that used in the Leaving Cert Applied might be acceptable for the junior cycle. In this programme, students accumulate credits in school over two years of study and combine these with marks from the externally assessed Leaving Cert exam.

Some teachers also assess their own students in Irish oral exams for the Junior Cert.

Asked whether the unions’ opposition to school-based assessment was tenable in this context, Mr Quinn said: “All of those experiences have been a learning curve for the teaching profession, and it is against that background we have crystallised the position that school based assessment for the Junior Certificate is unacceptable.”