TCD says it will ‘act’ on rebranding suggestions 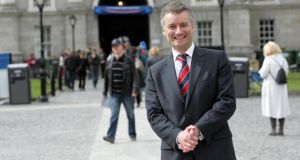 Trinity provost Dr Patrick Prendergast was heckled at a scholars’ dinner in the college dining hall on Monday night, with emotions running high on campus over the “identity initiative”.

Dr Prendergast told the audience he would take on board feedback, which was interpreted by some attendees as a climbdown on the plan.

However this was denied by college sources yesterday, who said the provost had received many messages of support from alumni in Ireland and overseas.

By changing its name in official communications to “Trinity College, the University of Dublin”, TCD seeks to reclaim one of its traditional identifiers as well as avoid any confusion in Asia where “college” is associated with undergraduate studies.

“Consultation with the college community is ongoing,” a college spokesman said yesterday.

“Many people, including some of our senior academics, have made excellent suggestions for improvement of our logotype, which is in the early stages of development. These suggestions will be actioned,” he said.

Rather, “the logotype we are working on is based on the shield, with words to enhance our status as the University of Dublin”.

“We are making sure that the logotype works in digital environments. The one we have now does not.

“And we hope it will help Trinity tell a powerful contemporary story that is strengthened by our heritage and tradition,” the spokesman added.

A final decision on the proposed rebranding will be made before the summer in advance of the publication of TCD’s new strategic plan.