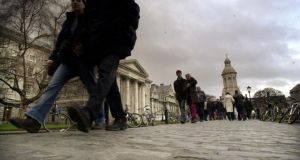 Under the college’s so-called identity initiative, TCD will be replaced by the name “Trinity College, the University of Dublin” in all settings other than academic publications. Photograph: Dara Mac Donaill.


The changes at Trinity College Dublin in relation to its new brand name and image extend not just to religious symbolism with the Bible on its crest being replaced by an open book. The college has also decided to move away from the blue and gold colour scheme on its shield as it is considered too close to that used by “value” brands such as Ryanair, Ikea and Maxol.

While the college plans to unveil its new brand image in September as part of its strategic plan for 2015-2019, The Irish Times has had sight of the planned new college shield to be used along with TCD’s official new name: Trinity College, the University of Dublin.

In a bid to create a more “contemporary and vibrant” image, the number of colours in the university logo is being reduced from five to two: blue and white.

Consultants employed under the €100,000 rebranding initiative noted blue and gold were commonly used in heraldry but were also often associated with “value or convenience”.

They cited Rynair, Ikea, Visa and Walmart as among a number of brands that are associated with blue and yellow, a colour combination which they said “lacks a sense of quality and sophistication”.

In contrast, the white Trinity symbols against a blue background “creates a modern, crisp” image.

A blue and gold version of the shield is being included in TCD’s new identity “toolkit”, designed for use in the likes of marketing, letterheads and seminars, although the consultants noted this colour grouping “tends to ‘cheapen’ the overall look and feel”.

Under the college’s so-called identity initiative, TCD will be replaced by the name “Trinity College, the University of Dublin” in all settings other than academic publications.

“We believe that this endeavour will allow us to better leverage our strengths and further enhance Trinity’s reputation at home and abroad,” said the management memo approved by the board this week.

“All of us will benefit, owning what we share, and, collectively, helping College to attract the best staff and students, research funding, philanthropic support, and impactful media coverage.”

The board agreed that the name TCD should remain in use in academic journals as more than 71 per cent of papers now use this name and to change it would risk harming what management noted was “Trinity’s [currently] declining position” in world university rankings.

The logo redesign retains the four original images on the shield, although the lion appears less dragonlike, the harp less ornate, the castle loses its drawbridge and the Bible with clasps is replaced by an open book.

While this is the “only significant material change”, a memo to the college board said this was “deliberate and symbolic” and would “signify our tradition of scholarship which should be accessible to all”.

It notes there would be consistency here with the university coat of arms which features an open book.

By featuring fewer colours and less detail, the logo is easier to reproduce online. “Our current logotype is not digital-friendly,” the memo points out.