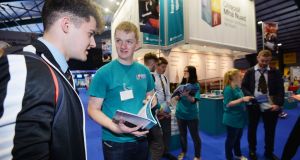 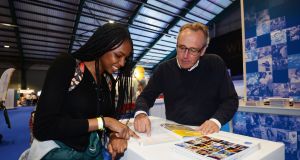 Thousands of teenagers with curious and enquiring minds are making their way to Dublin this week to find out the various options available after they finish their Leaving Certificate next year.

More than 25,000 students from across the country are expected to attend the three day The Irish Times Higher Options conference at RDS Simmonscourt, which started on Wednesday.

There was plenty of head scratching and long stares down into the expo by students as they first entered to see more than 190 stands from colleges, universities and institutes of further education from Ireland, the UK and Europe.

When they left hours later they were laden down with brochures and prospectuses. There was also plenty of excited and lively debate on the different paths that could be taken for qualifications.

This year’s annual event, run in association with the Institute of Guidance Counsellors, had an increased number of agricultural and rural studies colleges, as well as a strong presence from construction and engineering industry highlighting apprenticeships as an after school choice.

There was also a higher number of international colleges exhibiting than previous years.

Brian Mooney, guidance counsellor and education columnist for The Irish Times, said most students speaking to him on the first day of the event were uncertain about what they would do after they had finished their exams next year.

“This event is their first outing, so to speak. It brings realisation for students that after this year school will end as they know it,” he said.

“It’s been a good day and lots of questions. One issue that came up is that many students are worried about the new grading and points system; there’s uncertainty.”

Mr Mooney said there was also a number of students who asked about options for careers paths outside of third-level.

“There were a lot of people asking where to go to if they don’t want do an university degree but they were almost afraid to say it,” he said.

Topics featured in daily talks include working in science, careers in engineering and construction, nursing, agriculture, art and design, and computer science.

There will also be lectures on Central Applications Office (CAO) applications and the Student Universal Support Ireland (Sui) grants process.