Student loans: Imagine a degree for less than the cost of a Ford Fiesta

Opinion: Those who argue that student loans will lead to a lifetime of debt do not see personal loans that way 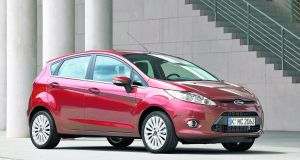 Opponents of income-contingent student loans invariably argue that their introduction will result in crippling lifetime debt. Yet they don’t see home, car or personal loans in the same way.

On a student loan of €16,000 for a four-year course, a modest €1,300 a year over 15 years has been mentioned by the expert group on future funding of higher education, chaired by Peter Cassells.

Remember, too, that if you cannot pay back your home or car loan, the bank can repossess them. But under the proposed income-contingent student loan, if you do not earn enough you pay nothing.

The OECD reports that graduates will earn 84 per cent more across their working life than nongraduates because they have a better chance of gaining the necessary experience and of becoming and remaining employed.

According to the Cassells group, Ireland needs to spend an extra €1 billion on higher education to bring it into competitive line with other countries. Where will this money come from?

Why should nongraduates spend more of their taxes on students who are likely to end up earning much more than they ever will?

Free fees have done little to improve access to higher education for disadvantaged young people. In Dublin, for instance, is it fair that the taxpayers of Darndale – where only 15 per cent of young people go to college – subsidise Dartry’s 99 per cent who enrol in higher education?

The reality is that Ireland needs more graduates but faces a possible shortage, which would lead to serious economic consequences and personal frustration.

The Cassells group says we need to increase the number of college places by almost a third to meet growing demand. Otherwise our participation rate for immediate school leavers will drop from 56 per cent to as low as 43 per cent.

Higher education funded by the taxpayer would once again become the preserve of the elite.

The expert group’s recommendation that loans be extended to part-time students is welcome. State officials have been consistently reluctant to extend exchequer funding to part-time students for fear of opening the floodgates. But part-timers fund full-time education through their taxes, so are they not equally entitled to have their education supported as well?

The current policy of privileging full-time students is akin to providing a safe harbour for yachts while letting the currachs fend for themselves in the open seas.

I similarly welcome a draft recommendation that loans be extended to learners in private colleges, who are currently seriously disadvantaged.

Higher Education Colleges Association private-college staff members regularly meet students from low-income families who want to progress to a recognised degree but are upset and tearful when told they cannot receive Susi grants or the back-to-education allowance. Eleven of the 45 CAO member colleges are private. It is a sector of growing importance.

The Cassells group’s recommendation is a tacit recognition that the private sector can provide places on recognised QQI courses at about€5,000 a year, compared with nearly twice that amount in the public sector.

Another great advantage of a student-loan system is that higher-education institutions will become more answerable to fee-paying students. In turn the students will value their courses more highly, resulting in more careful course choice and reduced dropout rates.

The government might also consider an arrangement that highly incentivises Norwegian students in their studies. They receive a 75 per cent loan and 25 per cent grant towards fees. For those who pass their examinations on the first attempt, the 75 per cent loan is knocked down to 60 per cent and the grant becomes 40 per cent. Failure among this cohort is the exception.

It will be argued that risk-averse, low- income families will not take out student loans. The Cassells group, in its discussion document published in October, wrote that this was not the experience in the UK or elsewhere where fees and loans were balanced with student-support schemes.

There is much talk nowadays of growing social inequality. In the long run, the best way to increase wages and reduce wage inequalities is not by raising the minimum wage but by investing in education and skills.