Unsustainably low fees should have raised alarm with regulators 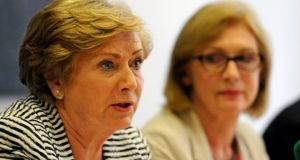 Another sector governed by light touch regulation; another mopping up exercise. Two Ministers stood shoulder to shoulder yesterday and assured international students that the “necessary” level of inspections would be put in place to guarantee they would no longer be prey to rogue foreign language schools.

Not before time, you might say, although Minister for Justice Frances Fitzgerald was reluctant to turn the recent debacle over student visas into a political football. The previous government “put a lot of focus on developing international students coming to Ireland” and “no doubt it was well intentioned,” she said.

It has grown into an industry worth more than €800 million to the economy, including spin-off activity, according to her department, with more than 6,000 courses provided.

“But clearly what’s happened is the regulatory framework did not keep pace with the scale of development and that was exploited,” the Minister remarked.

Echoing the tone of her Cabinet colleague, Minister for Education Jan O’Sullivan praised the good elements of the sector while saying: “We cannot let our international reputation be damaged by low-quality provision or rogue operators.”

The taskforce notes that “fees were unsustainably low” in certain colleges, something that should have been clear to regulators. Such providers, in the Department of Justice’s view, acted as “little more than visa factories, willing to engage in outright falsification of attendance records”.

The solution promised is a new register of accredited courses by January 1st, underwritten by an enhanced inspection regime. Limits will also be placed on the amount of time students can work outside of school, returning the emphasis of the student visa to its rightful place: education.

It is important to note – as the taskforce does – that the issues are not unique to Ireland. The UK government took the decision on June 24th to suspend three British universities and 57 private further education operators from sponsoring international students following an inquiry into visa abuses. The probe indicated that at least 48,000 test results were either invalid or were fraudulently obtained.

This home office inquiry followed a BBC Panorama programme which investigated a number of operators, including Eden’s UK company over alleged testing irregularities.

At its liquidation hearing in Dublin, Eden’s Irish owner Fakir Hossain said the television documentary had a “ripple response”, driving students away and eventually making the company inviable.

Wherever students are, then, they have an onus to do the research, and check that the course they are applying for meets industry standards. If a deal sounds too good to be true it almost certainly is.